Why should the old folks have all the fun? We have the 40+ season, now going on, with mixed doubles and single sex teams, while the under-40s are left on the sidelines. That’s why last year the USTA launched Social Nets, a co-ed league designed for young adults aged 18-39. It's all about having fun, meeting new people, and and hanging out with friends on the court.

In San Francisco, all of the action takes place at Golden Gate Park Tennis Center on Saturdays from 1:30-4 pm (there are also teams in Mountain View, Alameda and Elk Grove). The season started on January 30 and will end on March 19 (with a party, naturally).

Here’s how it works: participants play a round robin format every Saturday against players within their level, from beginners to advanced (levels are 2.5-3.5, 4.0, and 4.5+). First round is men’s and women’s doubles, second round is the same as the first, and third round is mixed doubles. Subbing of players is allowed and pizza is provided (so, there really are no excuses…).

“We had about 50 people show up to our first Saturday and I'm very excited for what is to come the rest of the season,” said Minnie Wong, coordinator of the Golden Gate Park Social Nets program (and Tennis Coalition Board member). 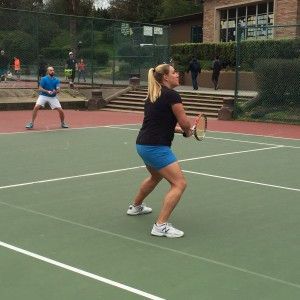