UPDATE ON SFSU COURTS
by Peg Stevenson, board member of Tennis Coalition and GLTF
February 17, 2016

Representatives of GLTF, USTA NorCal, Sacred Heart Cathedral School and Tenacious Tennis met on February 16, 2016 with representatives of the San Francisco State University Administration and Athletics Department to discuss the SFSU tennis courts. SFSU and the Giants are working on establishing an Urban Youth baseball academy on the campus and their current plans would have it built on the site of the tennis courts. We learned that Phase 1 of the Urban Youth Academy project would put a classroom and program building on North State Drive where the "bubble" buildings are now. Phase 2 would put in a baseball field for the Academy and take out the tennis courts. The good news is that SFSU stated that they are committed to keeping some tennis courts on the campus -- but they say they don't yet know how many, or how the site would change.  The timing is not determined either, but there will be no change to the courts during 2016.

SFSU has promised a regular meeting process and ongoing discussion with tennis organizations as their plans develop.  The tennis organizations, led by GLTF, are working next on getting a meeting with the Giants on these issues.  We are advocating that SFSU and the Giants look at other sites, specifically existing baseball fields in under-served areas of San Francisco that would be great places for the Urban Youth Academy and at the same time not mean tearing down the vibrant community recreational center that is the SFSU courts.

CORRECTION: The Tennis Coalition has been informed that the sale of the Bay Club SF building has not been completed, as was stated in the story in the first edition of Courtside SF. It is in escrow.  We regret the error.

In a city that has been deemed the most expensive in the nation, and is only seven miles square, it’s no surprise that every piece of real estate is considered a hot property. That’s certainly the case in San Francisco, where in recent months this competition for land has caused some alarm in local tennis circles. Not one, but two tennis complexes in San Francisco are now on the chopping block, being redeveloped for other purposes.

Plans are afoot to tear down the Bay Club SF (also known as SFTC) and San Francisco State University. The loss of both would result in 40 fewer tennis courts in the city.

The Bay Club has already sold the block-sized building at 645 5th Street that houses 12 indoor courts (the only indoors courts in the city) and 12 rooftop courts. It’s not yet clear what will be built in its place, since the plan that the new owners submitted last fall has been withdrawn (see SF Examiner story from October 28, 2015). The developers had originally proposed building a 370,000-square-foot, five-story office complex, a 25,000-square-foot sports club, and four tennis courts. 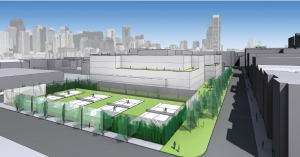 A group of Bay Club members launched a nonprofit called “SOS STC 2.0 -- Save Recreation and Tennis in San Francisco” to try to keep the courts in tact. They have launched a fundraising page to support their efforts.

To make up for the loss of the courts at SFTC, the Bay Club is exploring its options for building new courts in San Francisco. They made a bid for the space at the Palace of Fine Arts, but they were not selected as finalists. We will keep you updated as events develop.

Meanwhile, across town, another group of active tennis players is concerned about the impending disappearance of “their” tennis complex, this one at SF State University.  Last year, it was announced (by President Obama, no less) that the San Francisco Giants would be building a Junior Giants Urban Youth Academy. It turns out that the proposed facility for the Academy, which is a joint effort by the Giants Community Fund, SFSU and Major League Baseball (MLB), is proposed to be built where the SFSU tennis complex now stands. (See story in SF Examiner).

The Gay & Lesbian Tennis Federation (GLTF), Sacred Heart Cathedral Preparatory School, and the Tenacious Tennis youth training program all use SFSU’s 14 courts as their home site for clinics, matches and tournaments. GLTF, which boasts more than 500 active members and last year had 45 USTA league teams, is the biggest user of the complex. (Read the November 13, 2015 letter that the GLTF sent to SFSU.)

Peg Stevenson, who sits on the boards of both the GLTF and the Tennis Coalition, has been in communication with SFSU and is working to get a meeting between GLTF and the other court users with the SFSU administration and the Giants to discuss the fate of the courts.

She tells us that a previous University master plan had proposed building tennis courts on top of the parking structure near the existing tennis complex. “But that is no longer in the cards—there is no money for it and the parking structure is probably unsuitable,” says Stevenson. “The University has no current plan to replace the courts and admits that if they are torn down they will not be replaced by SFSU.”

Stevenson notes that prior to the announcement that the Junior Giants would go to SFSU, there had been negotiations with the City of San Francisco to site the Urban Youth Academy at existing baseball fields in underserved areas of the City. The GLTF, she says, will be urging SFSU and the Giants to join together with the City and consider that option rather than tear down an active recreation facility and displace players and families from the SFSU tennis complex.

The Tennis Coalition will follow developments as they arise and keep you posted. Stay tuned!