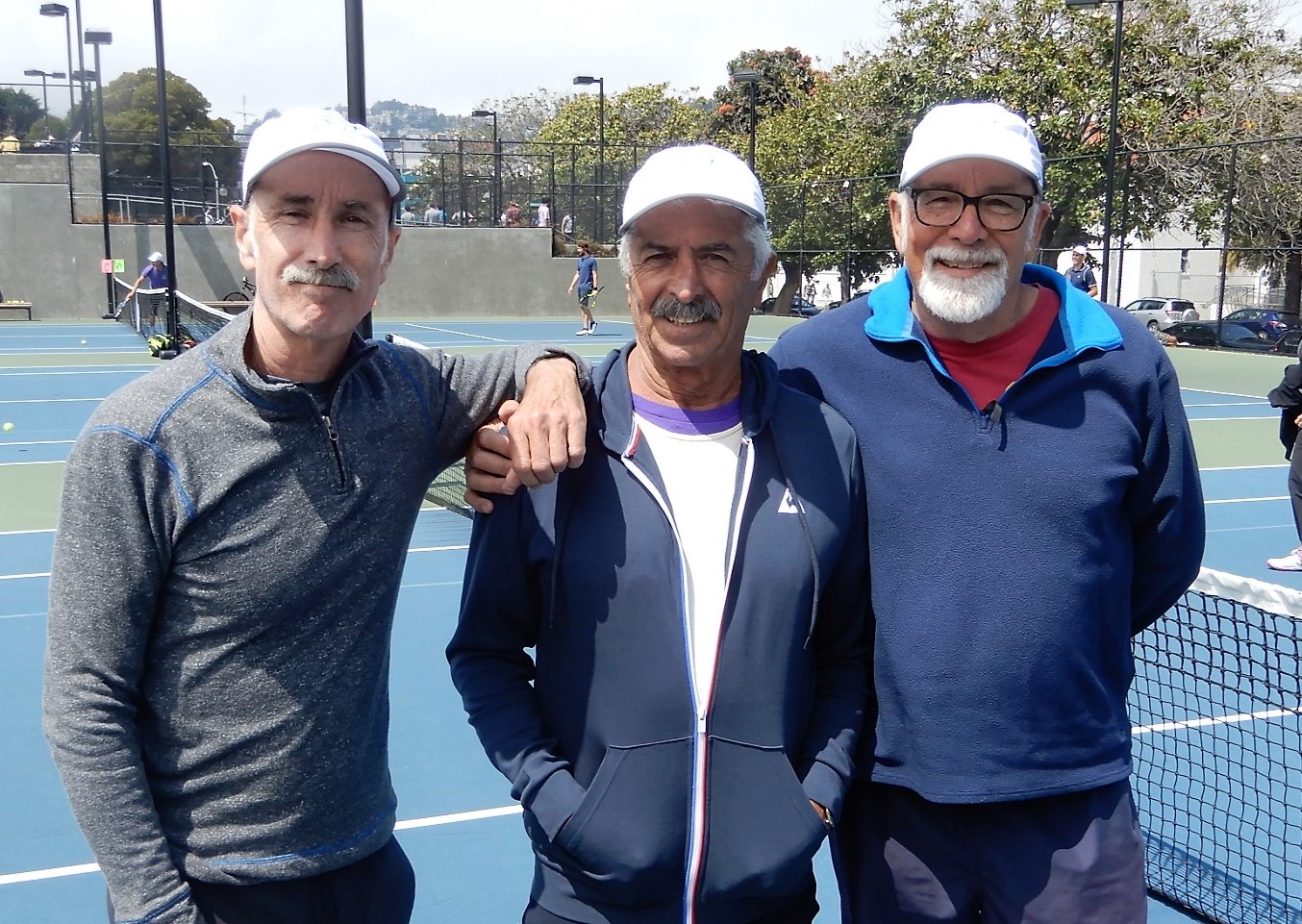 The Tennis Coalition was introduced to Gary because of his work (volunteer, of course) organizing the annual Dolores doubles tournament for the past 12 summers. We asked him to tell us about his love of tennis and his favorite SF park. Here’s his story.

I couldn’t imagine my life without meeting friends on a tennis court and rifling a winning passing shot or executing a deft drop volley. In addition to playing guitar and making music, tennis has brought me great personal enjoyment.

My tennis life started at 17 when my parents bought a “starter set” of 4 chintzy rackets and some balls at CostPlus in San Francisco. This was the time when tournament tennis became “Open” to professionals as well as amateurs – which may have been the cause for my folks interest in the game. The four of us went to the courts at McLaren Park (I grew up in the Portola district) and hit the ball around, not really knowing what we were doing. My Mom and sister soon dropped the game, but my Dad and I continued with the sport - he played until he passed away in 1996.

I was able to get my first tennis instruction in PE classes while attending Cal and whetted my competitiveness in tennis intramural leagues. After graduation, I served in the Peace Corps in Ethiopia where I occasionally was able to play on the clay courts at the US Embassy in Addis Ababa. When I returned to the States, I participated intently in USTA D-class (probably equivalent to NTRP 3.5) tournaments. I won and/or placed highly in several of them and was ranked near the top of my class in NorCal in the late 70s. But then I suffered a debilitating leg/hip injury (playing softball!) which kept me from the courts for over 9 years.

After an odyssey of therapy, I was able to return to the sport in 1988. My wife and I were living down on the Peninsula at the time, so I first joined the Redwood Shores TC and later the San Carlos TC -- both clubs playing on public courts. With San Carlos, I played on USTA men’s and mixed teams, a singles player on the men’s team. Several of those teams were league champs and sectional participants.

Moving back to the City in 1996, I began to play at Golden Gate Park and joined the club there. The GGP Club Day events were a good intro to the SF vibe and personalities at the Park.  I joined several USTA teams (men’s, mixed, and combo) based in GGP, and again some of them became league champs.  Also I participated in the Club tourneys, highlighted by me winning the 4.0 men’s singles title in 2000. After I lost a close match in a subsequent club tourney, my opponent commented I might find the tennis crowd at Dolores Park attractive since the level of play was well suited to mine.  So began my association with Mission Dolores Park.

I started frequenting Dolores Park in 2003 and soon became assimilated into the diverse community there. Men, women, gay, straight, old, young, blue collar, white collar. A fascinating mosaic of backgrounds and personalities. Certainly more varied than the tennis crowd in the ‘burbs. During my working life (biotech R&D for 25 years), I visited Dolores Park on weekends and holidays, usually getting into a pick-up doubles game in the mornings. You waited your turn and paired up with whomever was next. Our system was that the team that won could stay on for another set.  If they won again, then it was four off. It worked well for us and allowed anyone to enter into the mix. Soon I became involved in organizing (what can I say -- I’m a Virgo!) an annual doubles tournament, with the field mostly comprised of the regulars at Dolores Park. Our format was to have several flights with round robin play in each flight.  Flight winners would later vie in a semi and final. We had tourney T-shirt or hat giveaways to participants, and trophies for finalists and winners.  In later tourneys, we had door prizes, roving officials, & court scoreboards. I’ve organized the Dolores Park Community Doubles tourney for 12 years now, certainly with the help of others, and each time have managed to improve upon it just a bit. Regrettably, like Wimbledon, there will be no 2020 Dolores Tournament because of the pandemic. Disappointing for many of us, to say the least. [photo: participants at the 2019 Dolores tournament]

After Dolores Park and its courts were renovated in 2015, the dynamic changed (the cracks in the court surfaces in which you could insert your racket were finally gone!). There were many more people vying for court time on Saturday & Sunday and unwilling to buy into our system of play. So, many of us retreated to the nearby Mission Playground courts on the weekend, bringing our round robin system. After my retirement in 2012, I was able to find a doubles game at Dolores Park during weekday mornings, but after the renovation and because 3 of the 6 courts are now reservable, court availability even on weekdays at Dolores has become problematic. During the early years of the Dolores Tournament, we sort of took over 2 or 3 courts for the day of the tournament, sans any official permit from the City. However after the renovation, we would have had vehement complaints about commandeering the courts, so we ran the last few tourneys with permitting for three courts from SF Rec & Park.

To wrap up my tennis journey, I’ve not only enjoyed the exercise and lively competition that tennis has availed me but also the endearing camaraderie and enduring friendships that have resulted from my time on the court or afterwards, over a cold beer with fellow players.