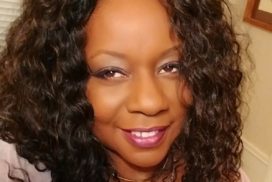 Angela Dorsey grew up playing tennis daily at Golden Gate Park Tennis Center in the 1970s and 80’s. She was a ranked junior player in Northern California and All-City champion in high school for three years straight (her sister Kalyn Sloan beat her in the finals her freshman year). Her father Albert coached Angela and her sister at GGPTC and they were only one of many families that spent much of their free time there.

Says Dorsey: “We gave so much of our young lives to be great at tennis, and Golden Gate Tennis Center was our playground.”

1. You grew up playing tennis at GGPTC every day of the week in the 1970s and 80s. What was the atmosphere like at that time?

GGPTC was packed from sun-up to sun-down. It could take you up to two hours to get a court. My father would have me and my sister hit on the back board at court 21 until our courts became available. Or we would get asked by the seniors if we wanted to play doubles. I can remember just having the best time as a kid every day at the courts and the playground. We were all family, and it grew to be more than just family as time passed. Generations of tennis families grew up at the park.

GGPTC courts were well kept up at all times. A place that was once overflowing with flowers, laughter and competition is now run down. Old memories have been forgotten and replaced with new people, new ideas, and new memories. GGPTC is history for SF. History that created great family memories, great players, and hopefully future memories for the next generation of players.

Having public traffic was great for us juniors who were good. People would stop, and watch us. Image taking your stroll in the park, and you got to watch the best SF players around. Good players played on courts 1-4, 6-9, 12-15. If you were a regular at the park, you knew the rules of the courts. If you followed the rules of having just three balls on the court. Being public courts you understood this is not the country club, and you had to be courteous.  Also, you didn’t walk behind the court when a point was in session. We kept the courts safe too. We never had any issues, and if we did we all came together to protect each other. Public courts came with SF elements, but I wouldn’t trade it for anything. It added character on daily basis.

The best memory was Rosemary Casals’ father would visit the park, and sit behind court 1-4. It was just such an honor to know who he was, and what his daughter achieved coming out of public courts at GGPTC. I would on occasion see Robin Williams running behind the courts in the path in the trees that is now overgrown.

I am just one of many with memories. I came to the park at seven years old, but there were already established families playing at the park. Public courts should remain open to the public. GGPTC can be refuge for so many families that can’t afford to play at private clubs. People came from all over to play at GGPTC, because we had the best players around from public courts. Without the tennis programs that Rec & Park gave us.  I would not have had the opportunity to say I was ranked in junior tennis in Northern California.

2. Who are some of the great players that you played with or saw playing at GGPTC?

3. What are some of the lasting memories you have of playing at GGPTC?

My childhood was spent playing tennis every day for close to 20 years of my life. My father Albert Dorsey was my coach forever, and he gave me and my sister this sport to carry with us for the rest of our lives.  He was loved by so many at the park. I think I will cherish so many of the parents that gave us a childhood that kept us out of trouble.  I think winning tournaments on my home courts will be something I won’t forget.  I was the youngest to reach the final in the Girls All City champion as a freshman, and the first to win it three years in a row. I was voted athlete of the week two years in a row by the city. My sister lost in 1978 finals and won 1979. I won the SF Junior tournament at GGPTC.  But most all the people I grew up with will be memories to last a life time.

4. Do you still play tennis? How often and where?

At 40 I was playing and practicing to compete again, but I got pregnant. I still play very well.  I do not play competitive but I still hit the ball very well. I even hit on the backboard to keep my strokes up.  You never forget how to play, and I think I play better now than I did as a junior.  Your mind thinks you’re still a 16-year-old player, but your body says otherwise.  Life takes over, and time to get out is very difficult.  I don’t live in the city, but if I did I would always play at the GGPTC tennis courts.

5. What would you like to see at GGPTC in the future?

It would be nice if things stayed the same, but you need progress.  The park should be accessible to the public -- the charm for the park is that its public.  I know times have changed, and elements are more abundant now.  The general public should still be able to pass through and watch.  I would like to see the tennis courts promoted as the best public tennis courts around. Lights would be great.  My father had us practicing until it was dark.  He would have been pleased to see lights at the park.  I would like to see a memorial to the players who came and went. Lives were spent at the place and I don’t want that to be forgotten.  Future generations need to know the courts are here to stay.