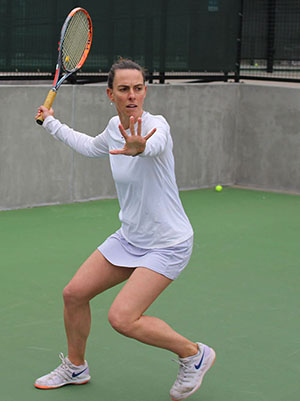 Alison Comfort is a health economist at the University of California San Francisco where she leads research studies on HIV and reproductive health in Uganda, Madagascar and here in the US.

She is passionate about tennis, both as a player and now as a founder of Tiebreak, a tennis app to help players find others that match their preferences while bringing together the local tennis community. She lives in San Francisco with her husband and three young boys.

1.How did you first get into tennis?

I grew up in a tennis family. As a baby, my parents would put me in a laundry basket court-side while they hit. I was raised in Paris, France where we found a coach that we liked so much I ended up training with him from my very first lesson through the end of high school. By high school, I was training multiple times a week with my French tennis team and we ended up making it to the pre-national division. My claim to tennis fame growing up was being a ball girl at Roland Garros. I was the one at the net, running back and forth when Monica Seles beat Steffi Graf. I played Division III at Amherst College, but then ended up taking a long break away from tennis. I recently rekindled my love for the game and have been competing as fiercely as I can.

2.Where do you play; do you compete on any teams or leagues?

I’ve played throughout the city on the many amazing public courts and have tremendously enjoyed the Lisa and Douglas Goldman Tennis Center. It’s a beautiful facility. On weekends, you’ll find me at the US Open watch party and the Bryan Brothers youth event (where my son was lucky enough to get a chest bump with Mike Bryan). Ever since getting back into tennis, I’ve been competing in tournaments, working my way up the NTRP and UTR rankings. I love singles but am also trying to play more doubles to improve my net game. One of my goals is to start competing in the Open level draws.

3.Why did you decide to create the Tiebreak app?

When I was first getting back into the game it was hard to find players at my level with similar playing styles. Each player is unique: some prefer singles, some play doubles. Some want to keep it competitive, while others want to make a friend on court. I’m on the competitive side, and it was just by chance that I met hitting partners that matched my style. This left me wondering, if I hadn’t been at the right place at the right time, would I have ever met these hitting partners? I also noticed other people wanting to find better ways to meet tennis players too.

I launched Tiebreak to bring together people who are passionate about tennis, whether they are weekend warriors, former college players, retirees who can’t get enough time on court, or those who are new to the game. The idea is to let people’s passion come through in their Tiebreak profiles. The app allows people to find tennis players they might not otherwise meet, while getting to know their local tennis community. I also wanted to create a tennis exchange that is inclusive no matter a player’s level, age, gender and other identities: something where everyone feels welcome and comfortable.

4.How are people using the app?

The Tiebreak community is growing by the day. Once someone creates their profile, Tiebreak recommends players that best fit their preferences: whether it's playing singles or doubles, during the week or on weekends, rallying or playing a tiebreak. People are using Tiebreak to search player profiles and then messaging them through the app to see if they would make a good tennis match (pun intended!). The profiles are designed to bring out people’s passion for tennis. People share what they are like during changeovers, their favorite tennis quote, and even an anecdote about their love for tennis. Some of my favorite quotes on players’ profiles include: “You only live once but you get to serve twice” and “Happiness is a sizzling passing shot.”

Tiebreak can help people find a fourth for doubles, fill out a league roster or experience the excitement of a brand new hitting partner. I’ll admit that even I have benefited: one of my hitting partners started travelling and another was injured, so I needed Tiebreak to find others to hit with. My hope is that, as the Tiebreak community grows, more and more people can find others to play with, whether it’s a one-time match or hitting for months to come.

5.Aside from your passion for tennis and Tiebreak, what are your other passions?

Aside from being a tennis player, I’m a research scientist here at the University of California San Francisco. Ever since serving as a Peace Corps volunteer, I have had a passion for designing interventions and evaluating approaches to improve health outcomes for women and children, particularly in under-resourced settings. I have on-going research projects on HIV and reproductive health in Uganda, Madagascar, and here in the US. On weekends, my energy is mostly focused on my three young boys. You’ll find my husband and me traveling from tennis courts to soccer fields to track events while fueled by a whole lot of coffee.