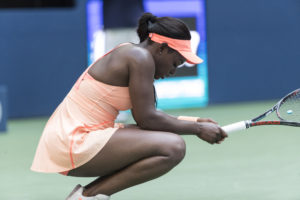 You’re down 5–2 in the third, and your mind is telling you to pack it in. It’s a thought that is easy to believe, given the situation you are in. After all, you may not be playing that well, you’ve already tried everything you know, so what’s the point? Well, you never know what might happen if you keep your head in the match. I am a big believer of never giving up until the match is over. Deep down, I think you are, too. Managing your mind is your greatest challenge because too often it will try to convince you to fold up your tent and go home.

It is likely that your mind will get overly consumed with the score when you are losing—a very natural place to focus when you’re in a hole. However, this is where the secret lies. Because guess who is also focused on the score? That’s right, your opponent. While your mind is telling you that the gap is too large to mount a comeback, you need to ignore it. The truth is, you may only need to grab a game or two before your opponent starts handing the rest over to you on a silver platter. This is where a “one point at a time” mentality will come in handy. Maybe even one shot at a time. But know this: Whatever you are feeling, I bet your opponent will feel the clamps twice as much after you win a game or two. Think about this statistic that came out of a study at Harvard: In a given match when you are playing an opponent of equal ability and can win just one point out of ten more than you did yesterday, the possibility of you winning rises from 50 to 90 percent!

One player shared with me the story of her comeback. She was in the state championships in high school, down 5–1 in the third set. Staring down the barrel of a 5–1 deficit, she knew her lifeline was pretty short. So, as she approached the deuce court to return serve, she suddenly stopped, turned, and walked back to the fence. Something deep within her spirit encouraged her to pull it together, give it all she had, and to fight until the end. This command—call it her deeper self, soul, whatever you want—was telling her to pull it together, to give it all she had, and to fight until the end. Point by point, rally by rally, she demonstrated that she wasn’t going away easily. And, as is often the case, this created the “yips” for her opponent. Her opponent started going for too much (also common) and was making errors. Within about twenty minutes, she mounted a comeback and won the match 7–5 in the third set. She told me that, apparently, her opponent threw all her racquets in a nearby lake. I suppose losing a match like this after having such a lead was exactly what her opponent didn’t want to do, and she pushed that fear button in her opponent by hanging in there.

To dig deeper, train yourself to take a few extra seconds to gather yourself when you are feeling negative or tense. Go back to the fence, look at your strings, and tell yourself to hang in there. Tell yourself that you can still win. You are still in it. Recall past matches when you prevailed from a deficit in a match. Think about how tense your opponent might feel with a lead. Then take a deep breath, pull up the fighting spirit within you, walk up to the line to serve or receive, and focus only on the next point. Mount your comeback one shot at a time.

You never know when the score may begin to tilt in your favor if you decide to fight until the end. Never give up.