Home » GGPTC renovation » Why I Give: Jacqueline Ryan — and her siblings — give to honor their mother Barbara 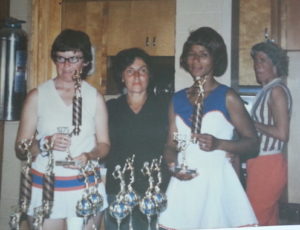 Barbara Ryan (far left in photo) was a regular on the public courts in San Francisco back in the 1970s. A San Francisco native, she played at Golden Gate Park and Rossi Courts, as well as in Daly City, throughout her life.

As a tribute to her, Barbara’s children – Jacqueline, Mary, Kathy and Joseph – have donated $25,000 to the Campaign for Golden Gate Park Tennis Center, where a bench will be dedicated to her memory. Jacqueline lives very close to the GG Park Tennis Courts in the Richmond district and has a business in the City. Kathy lives in San Mateo and works at UCSF on Parnassus.  Mary lives and works in Sonoma and Joseph lives in Marina Del Rey (Los Angeles).

Below, Jacqueline responds to our Five Questions…

1. Your mom was an avid tennis player at GGPTC. What stories did she tell you about her experience there?

Our mother was born and raised in the City, and lived for a long time on Arguello Blvd. She used to play tennis at Rossi playground and also in GGPark, before we were born. When she got married to my Dad (also a native) they bought a Doelger home in Westlake (Daly City) which is where we grew up.

We used to go to Golden Gate Park with her and watch her play, as kids. I know she loved being on the ladder when we were younger. She also went to tournaments out of the City as well in various parts of the Bay Area. She played tennis until she couldn’t anymore.  She passed away at 80 years old but still LOVED watching tournaments on TV -- US OPEN, Wimbledon, etc.

2. What inspired your gift to the Campaign for Golden Gate Park Tennis Center?

When our Mom passed away, we knew we wanted to do something.  My sister called Park and Rec to inquire and was told the Golden Gate Park tennis courts were going to be remodeled!  We knew we wanted to make a donation in her name, and decided that a bench would be absolutely perfect, since my Mom loved playing there all the time and also was on the ladies’ ladder back in the 70’s.

3. What is the significance of having a bench in your mother’s name?

At first we didn’t know what we would do as far as a donation, but decided that giving the extra to get a bench would be a wonderful reminder of how much she loved playing AND watching tennis.  It means a lot to us that we can make this donation and be able to visit the center when completed.

GGPTC means a lot to us because our Mom always loved to play there. As we got older (in our teens)  she couldn’t play as much at the Park because it was necessary for her to get a job.  For a long time she was the park director at Laurel Hill Playground (Euclid & Collins), which had two tennis courts. She was always teaching the game to the neighborhood kids or anyone else who wanted to learn how to play or just hit the ball.

4. What aspects of the renovation plans most excite you?

We love how the plans are changing things for the better. The courts and clubhouse have been there for so long unchanged, it might be tough on some people. I went to the Clubhouse during this past year and looked up on the wall and could see my Mom’s name still there on a plaque dating back to 1973 when she won some trophies.

5. What role does tennis play in your life?

My Mom used to bribe us to play tennis, but it wasn’t really our thing. We learned to play the game from tennis camps she signed us up for.  We, (my sisters and I) were totally into gymnastics during those years so we didn’t play as much as she would’ve liked us to. I did play on the tennis team at Westmoor High School and she was thrilled about that. During that time I remember she said “Come to the Park with me, I signed you up for a round robin tournament. They will match you up with a boy for mixed doubles.”  The player they matched me with was incredible.  We ended up getting SECOND PLACE!

Up until my mom was in her mid-70’s we would go out once in a while and hit the balls at Gellert Park (in Daly City) and she could still smack that ball really good and beat me at games!

Is there someone you would like to honor with a gift to the Campaign for Golden Gate Park Tennis Center? Visit www.supportGGPtennis.org or contact Julie Exley, Executive Director of the Tennis Coalition SF.