Szeto, who is the vice president of the Gay & Lesbian Tennis Federation (GLTF), captained the GLTF’s USTA Men's 5.5 combo team (which is headed to Sectionals!) giving some of its newer Tennis Academy players and others a chance to compete and grow their games.

He was honored on January 31 at the USTA NorCal ACES (Awards Celebrating Excellence in Service) ceremony, which was emceed by sportscaster Ted Robinson and held at Casa Real at Ruby Hill Winery in Pleasanton. 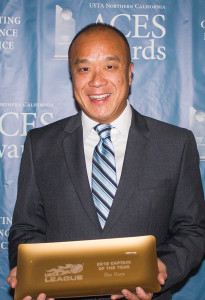