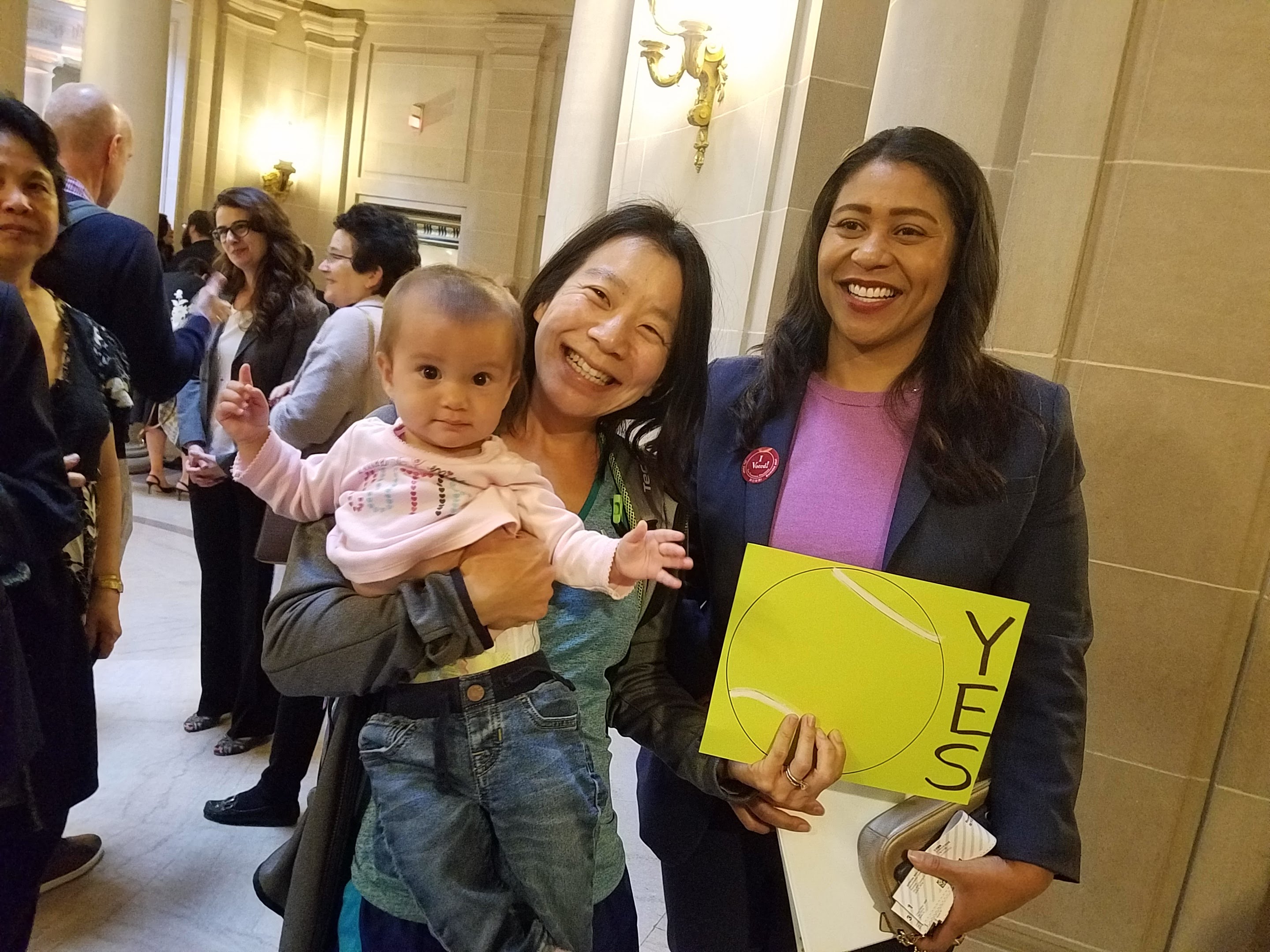 Jen Gaarder-Wang, a regular player at GGPTC, and daughter Ellia pose with London Breed, President of the Board of Supervisors, after the May 10th Budget and Finance Subcommittee meeting.

SAN FRANCISCO – Today, the San Francisco Board of Supervisors unanimously approved a package of legislation that will enable a major renovation of the Golden Gate Park Tennis Center, which will make the 124-year-old “Cradle of Champions” one of the best public tennis facilities in the nation, with a new clubhouse, professional-standard courts and expanded operations.

Plans for the renovated center, along with a capital campaign to fund the project, were announced earlier this year by the Tennis Coalition of San Francisco (TCSF), the Recreation and Park Department (RPD) and the San Francisco Parks Alliance (SFPA), who have partnered to give new life to the facility, where tennis has been played continuously since 1894.

A $26.3 million collaboration, more than half the funding has been secured from three significant contributions from the Lisa and Douglas Goldman Fund, Taube Philanthropies and the Koret Foundation.

Construction is slated to start in early 2019, with a grand re-opening in 2020 – Golden Gate Park’s 150th anniversary.

Some of the tennis world’s brightest stars started out or honed their games on the Golden Gate Park tennis courts, including Hall of Famers Billie Jean King, Rosie Casals, Brad Gilbert, Dick Gould and Peanut Louie Harper, all of whom are vocal supporters of the renovation.

The renovated Golden Gate Park Tennis Center will include a new, expanded clubhouse and 17 new courts and a dedicated classroom to accommodate an expansion of the RPD’s youth development program, the Tennis and Learning Center (TLC), which pairs tennis lessons with tutoring for middle-school students from underserved communities.

The addition of lighting on all the courts will allow for an additional 20,000 hours of play each year. An online reservation system will be introduced, and the new facility will feature the city’s first dedicated pickleball court, reflecting the growing popularity of the sport.

“I look forward to this renovation allowing more seniors and residents to engage in tennis and pickleball on a regular basis,” said District 1 Supervisor Sandra Fewer.

The Tennis Center renovation is a community effort more than a decade in the making. TCSF, RPD and SFPA engaged in a lengthy community planning process, before passage at the Recreation and Parks Commission in February and now the Board of Supervisors.

The clubhouse will hug the western edge of the site, providing open views to the courts from the community spaces and amenities.

A centrally located, sunken “feature court” will be created with a direct line of view from the new clubhouse. This court provides permanent seating for tournament spectators and can serve as a challenge court during normal play.

“This will be an expansion for the senior, youth and league tennis players in my district, many of whom play at Sunset Playground and will now have opportunities in our beautiful Golden Gate Park,” said District 4 Supervisor Katy Tang.

The renovated Golden Gate Park Tennis Center will be the flagship of RPD’s tennis offerings, which include 147 courts citywide – 40 of which have been recently resurfaced and 12 more are slated for resurfacing by the end of 2018.

“I applaud RPD – and San Francisco voters – for resurfacing the courts in our neighborhood parks,” said District 11 Supervisor Ahsha Safai. “I support this project because in addition to providing USTA standard courts for our city’s best tennis players, it will provide opportunities for our most senior tennis players, while expanding the Tennis and Learning Center for our youngest tennis players.”

For more information about the Tennis Center project, go to www.tenniscoalitionsf.org.