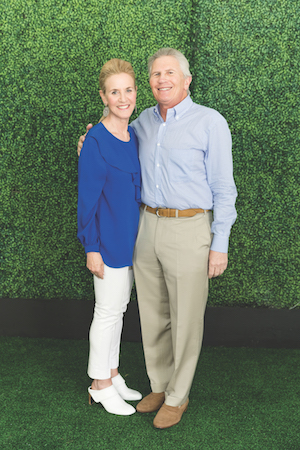 Without the support of Lisa and Douglas Goldman, the dream of revitalizing Golden Gate Park Tennis Center would be just that: a dream. It’s because of their critical support six years ago that this project is where it is today.

In 2012 the idea of renovating the facility had already been kicking around for years, and initial designs were drawn up by a volunteer architect. Enter Lisa and Doug, who put up funding through their foundation to ramp up the planning and organizing needed to take the project to the next level. Together with the staff of their foundation, they’ve remained huge advocates, contributing $6.635 million in total.

“I think it’s a great jewel in San Francisco,” says Lisa. “Providing tennis for youth, elderly — I couldn’t think of anything better.”

In recognition of their foundational and steadfast support, the renovated public facility will be named the Lisa and Douglas Goldman Tennis Center.

Says Doug: “Any time that we increase the level of a facility in the community, make it more attractive, cleaner, more current and looking toward the future, all of us benefit from that.”

The Goldmans have a long history supporting cultural and civic projects in San Francisco, including the renovation of Stern Grove 13 years ago. In fact, Doug’s great-grandfather was Sigmund Stern, whose widow donated to the city the land that is now known as Stern Grove. The Goldmans also have a special family affinity for Golden Gate Park Tennis Center. This is where their daughter Jennifer learned to play, becoming a passionate and skilled competitor who played at the college level while a student at USC.