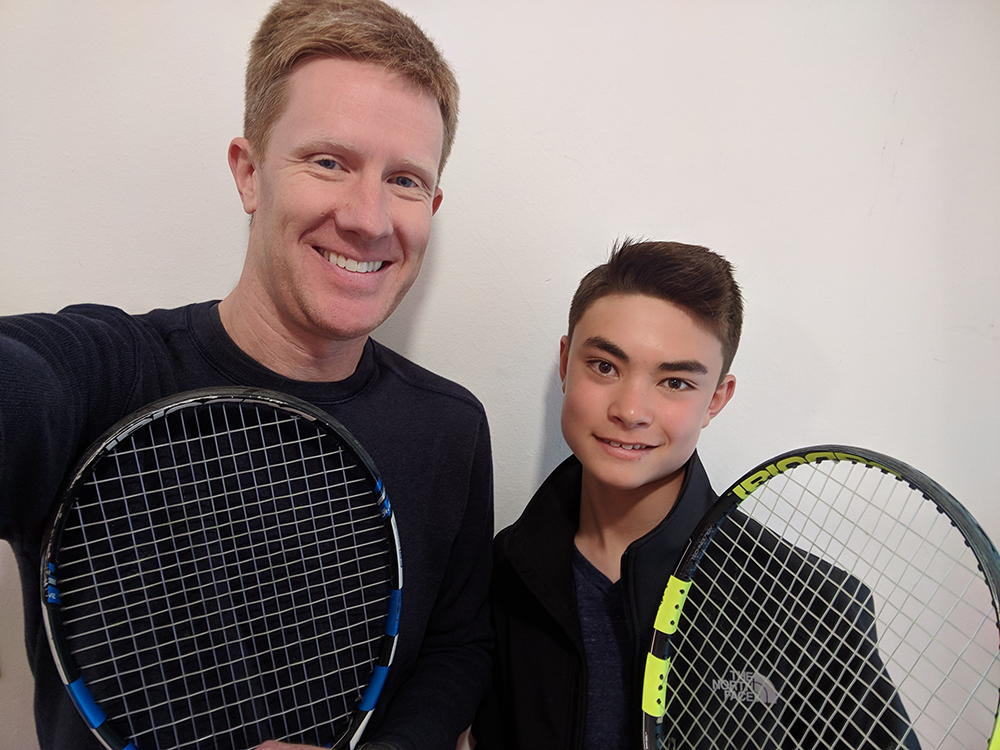 This is the first in a series of profiles on San Francisco’s passionate tennis players and vibrant neighborhood parks.

For Peter Belden, tennis is a family affair. He has loved tennis all of his life, thanks to his parents who were both avid players.

“I originally started playing because of my mother, who was the Massachusetts 16 & Under state champion. They called her ‘The Blonde Bomber’,” says Peter.

He grew up mostly in Rochester, NY but moved to Palo Alto with his family when he was 16. He played tennis on his high school team in Rochester but also began playing squash and exceled in that sport, so much so that at age 16 was ranked #13 in the country. In college at Princeton, he was a member of a team that won the NCAA championship.

After college, Peter moved back to the Bay Area and eventually settled with his wife, April Chou, in Potrero Hill. They and their two sons (Andrew and Justin) often play tennis together at the court at Jackson Park, only two blocks away from their house. Andrew is a competitive player who hopes to play on the Lick Wilmerding High School team next year as a freshman. Justin is a strong squash player, having reached a national ranking of #21 in the under 11 age-group, and attends Presidio Knolls School.

“Tennis is Andrew’s favorite activity and it’s great to have a neighborhood court where we can play together as a family,” says Peter.

In addition to being a passionate tennis and squash, Peter is an activist. He has dedicated his professional life to reproductive rights. Peter co-founded and was co-CEO of Upstream, a nonprofit focused on reducing the number of unplanned pregnancies in the U.S. Before that he worked at the William and Flora Hewlett Foundation and Planned Parenthood. He is currently focused on part-time consulting to make more time for playing tennis and squash with his kids and for advocating for a citywide connected and protected network of bike lanes in San Francisco. You can see the petition he launched at https://change.org/sfbikelanes. Although he has plenty on his plate already, Peter can’t help but want to advocate for another cause: saving the tennis court at his beloved Jackson Park. The Friends of Jackson Park is working with the City on a renovation plan, the current version of which eliminates the single tennis court. An earlier version of the plan included a rooftop tennis court but that design was rejected by Rec & Park. Friends of Jackson Park is working to have the project included in the City’s next Parks Bond this fall, so time is of the essence. Peter is trying to bring attention to the project so that any renovation plan preserves rather than eliminates the tennis court.

If you’d like to talk to Peter about saving the Jackson Park Court, or to join a list so that you can be notified of future opportunities, email him at pbelden@gmail.com.

SF Rec & Park is hosting a virtual public meeting about the renovation plans on Thursday, July 16, 7 to 8:30pm.  Register here.