Earlier this month the 14 & Under Co-ed Advanced tennis team from Golden Gate Park won the NorCal USTA Sectionals, earning a spot in the National championships. In October these talented youth will head to Columbia, South Carolina to represent Northern California and compete against the top 16 teams across the country.

At Sectionals, the GGP team competed in the highest elite division and were up against some stiff competition, including the Harker Academy, Courtside of Los Gatos, and the Almaden Valley Athletic Club. 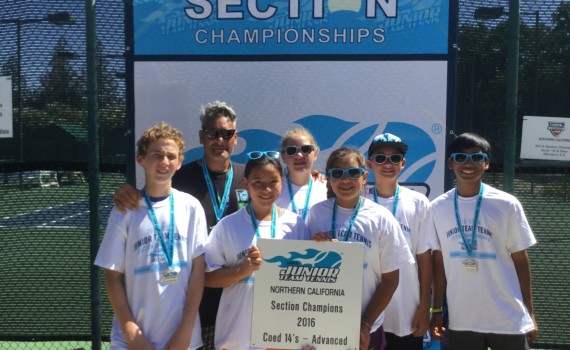 “Our team is made up of ‘regular kids’ who literally grew up in our SF Rec & Parks Department (SFRPD) tennis program,” said Maunupau. “Virtually all the kids started with us as 9- and 10-year-olds and were developed through our system. We were, and are, the only true municipal, City and County recreation department participating in this high-level national competition, which is heavily populated with private club teams.”

The team also went to Nationals in 2014; however this year they are in a more elite flight. In 2014 the team competed at the intermediate level and because Olive Maunupau had an undefeated season, she was moved up to the “advanced” level. Her coach (and dad) then had to move the entire team up.

“This was a tall task for our team, because now we are not only competing against prestigious programs, we are contending against the elite of the elite programs,” said (coach) Maunupau.

To add to the challenge, several players suffered either illness or injuries this summer, so playing in Sectionals was seriously in doubt. “Banged up, but determined, our team limped into the Sectionals” described Maunupau of the experience. They beat Harker Academy of San Jose in a 3-2 victory in the finals. And, on top of that, Daisy Maunupau (Olive’s younger sister) was voted by opposing coaches as a recipient of the section Sportsmanship Award.

This team has once again made their coach, SFRPD and Golden Gate Park proud. Said Maunupau: “Winning your respective league and going to the sectionals is an accomplishment in itself, but to win sectionals and have the honor of representing your division at a National championship against the top 16 teams in the country is beyond belief.”

Congratulations to Coach Maunupau and to the three girls and four boys on the GGP 14&Under Advanced team: