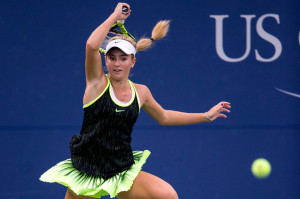 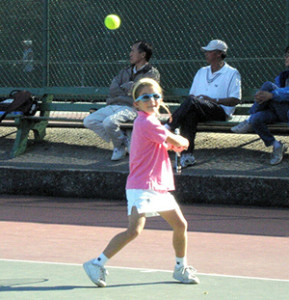 By Minnie Wong, Treasurer, Tennis Coalition SF Board of Directors

Answering questions for us this month is an up and coming American who turned professional a few weeks ago, shortly after winning three qualifying matches and two main draw matches to make it into the 3rd round of the U.S. Open, where she played a nightcap against world #1 Angelique Kerber on Ashe Stadium.

Her name is CiCi Bellis and though she now finds herself based out of the USTA training facility in Boca Raton, FL and traveling to pro tournaments all around, her roots are in San Francisco. Currently finishing up her senior year of high school and ranked a career-high #110 as of October 3, she was able to sit down and graciously take time from her busy schedule to answer some questions for us. We had so many questions that we went up to eight this month, and may do a “part 2” in the coming months. Stay tuned!

1. So you're a true San Francisco native. Could you share some of your fondest memories of growing up and playing tennis in San Francisco?
I have so many incredible memories from playing tennis in San Francisco. I was born there and lived in the City until third grade. We then moved to the Peninsula about 15 miles south for better weather, but still came up for tennis from time to time. My first tournament was at Golden Gate Park (GGP) when I was seven. It was the City Championships and I played in the 12s division. My mom took me inside the clubhouse and we looked at the plaques on the walls of all the phenomenal players from San Francisco who had played and won over the years at GGP. It was amazing to me and I really wanted to be like them one day. It's actually unreal to think how many world number ones, not to mention top 10 players, were from the San Francisco Bay Area. My mom and I researched and read extensively about Helen Wills Moody, Alice Marble and Margaret DuPont as we made our way around to play at the courts named after them in the City. We lived near Peanut Louie Harper and I met her one day and learned about her legendary tennis family. The best thing she told me was that her mom wouldn't let her leave the GGP courts each day until she had played five sets. That was amazing to me and reiterated the importance of daily match play.

The DuPont courts were near my school and my mom and I would go right after school was out and hit there. If those courts were busy, we'd try Mountain Lake and if those were full, we would head over to the Julius Khan (JK) courts inside the Presidio. In first grade, my mom took me and eight friends to JK twice a week and organized drills. We used two courts and had the best time hitting for prizes, playing king of the court and competing for record rallies.

I lived near Alta Plaza so some days I would come home from school, have a snack and play there before dinner. Every Sunday, a big group of parents and kids who lived near the park would meet at 4 pm for a couple hours of tennis followed by dinner at one of the houses. It was a blast.

My favorite parks were of course the ones that had a fun playground right alongside the courts. In second grade, I went to the clinics with Jake (Hall) and Lou (Maunupau) at GGP a couple of days a week. I loved those clinics. There were kids of all ages and it was six or more courts of fun drills and point play. After the clinic, I would hit the playground until dark. I lived for the slides there.

My mom was adamant about me playing at public parks. She always used to tell me that if you can beat a park player, you can beat anybody. I played a lot of park veterans around San Francisco when I was little and got used to their best junk. I hated it at the time, but now players who slice never bother me.

On rainy days, my mom and I played at the Metropolitan Club in downtown San Francisco. It might sound fancy but it was the furthest thing from that. My mom saw the old wood court on the fifth floor while touring the Club one day and she always says her eyes lit up at the thought of how much she felt that court would help my game. Obviously, the court was lightning fast and there was almost no space between the baseline and sidelines and surrounding walls. You had to play inside the baseline and cut the angle on everything. As I got older, we even trained there when it wasn't raining because we thought it was so great for my game. I still go there when I'm home. If something feels wrong in my game, playing on that court fixes it immediately. Nothing can be off with your stroke if you want to play well on wood.

2. What other sports did you grow up playing and how did you choose tennis?
I played soccer until I was ten and then chose to move forward solely with tennis. I liked being in an individual sport like tennis so much better. Plus, I didn't like the contact in soccer. Once it started getting rough, I wanted to stop.

3. Go-to place to hang out whenever you come back to San Francisco?
I love Union Square for shopping and can walk there after tennis practice at the Metropolitan Club. I lived in the Marina district until Kindergarten and then Pacific Heights until third grade so l love visiting the restaurants and shops in those neighborhoods when I'm in town.

4. Up until a few weeks ago, you were planning on returning to the Bay Area and playing tennis for Stanford; what parts of the college experience are you going to miss the most? What swayed your decision to turn professional?
I think I will miss being on a team. I was looking forward to that. I have played for the US junior Fed Cup team over the years and have actually never lost a match. I play so well when I know I'm being counted on to win. I will also miss being part of the Stanford community. I thought that would be really neat. But, as my game started coming together over the summer, I just felt like turning pro was the right decision. It's what I have been working toward my entire life. I love tennis and can't wait to get to the courts each day. I know I can do great things in tennis and wanted to focus full time on achieving my goals.

5. What are the most significant perks now that you're a professional tennis player?
Not really anything so far. I have always worked hard, but now I have more incentive to work even harder. I consider it my job now and I want to do very well at it.

6. Serena Williams had Jay Z and Beyonce in her suite at the US Open. Which top celebrities are on your invite list?
No one yet!

7. What are your top three highlights from the US Open?

8. What is your next tournament?
$50,000 ITF Event in Saguenay Canada in October

Read part 2 of the interview