Steve (far right in this photo recently taken at an event for Special Olympics) has been in the tennis industry for the past 35 years.  For 20 years he was a Teaching Pro, for 8 he was a Club Manager, and for 17 years he was a USPTA Pro. For the past 18 years, he has worked with the USTA NorCal, 10 of those as Executive Director.  Steve has extensive experience in developing Community Tennis Associations, working closely with private clubs, Park and Rec. departments, and many other tennis organizations. 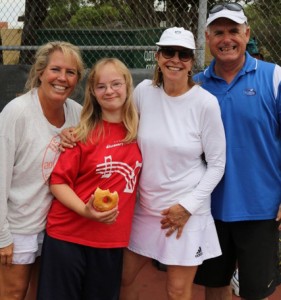 1. How were you introduced to tennis?

My mother introduced me to the game when I was 10. She used to throw me balls at the Chico State tennis courts, before her matches.

2. Do you still play tennis? Are you a league player or recreational?

Yes, I still play. Mostly recreational, but I am considering rejoining a league team.

3. What's it like to have a job that is all about tennis? What are some of your responsibilities as USTA NorCal executive director?

Wonderful! I have a true passion and love for the game. It is very rewarding to work with so many different individuals and organizations who are just and passionate about growing the game. Also, I am very privileged to work with the best team members in the country.

Being that USTA NorCal is a non-for-profit company, I report to the Board as a whole. My responsibilities are to implement to the best of mine and my team’s expertise to grow the game of tennis for adult and junior participation through goals set by the Board. Besides being responsible for the daily operations of the section office, some of the other responsibilities are to figure out the best ways to grow the game by programming, IT and marketing.

4. Have you observed any major shifts in USTA league tennis in your 18-year tenure?

Yes, the biggest shift that has happened is that now almost 50% of players are from Park & Rec sites and schools, whereas they used to be predominately from private clubs. We have also more than tripled the amount of leagues being offered now as compared to 18 years ago.

5. What are some of USTA NorCal's achievements of which you are most proud?

Out of the 17 national sections in the US, for the past three years NorCal has been the number one section in terms of percent growth overall both by membership and participation. This is due to a great collaborate effort by our Board, Committees and staff. We are about the eighth largest section by demographics, but by membership we are the fourth largest section and we are second largest section for participation in Adult Leagues and Junior Team Tennis. We have also been a leader in developing new programs for adult, juniors and for software development from our IT department.