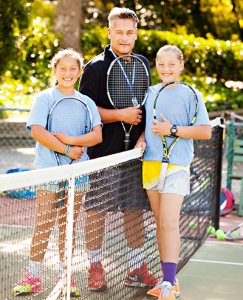 1. When did you start playing tennis? How did you first discover the sport?

I started playing tennis when I was 10. My dad loved to play with the early morning group at Golden Gate Park Tennis Center (GGPTC). We would typically get up on the weekends at 6:30 a.m. and ride our bikes to the GGPTC and play until 9:00 a.m. That is how I discovered tennis.

2. You coach your daughters – Olive (14) and Daisy (12) – who are both accomplished junior players. What do you hope they get out of the game of tennis?

The answer to that is very simple. When they have a family I want them to take their children to GGPTC and play tennis with them. After that I want them to take their kids to breakfast and hang out in the park for the rest of the day; riding their bikes, throwing the football around, playing ping pong in the clubhouse, playing basketball, and ending their day with a nice dinner. Playing tennis is a great way to bond with your family, especially at GGPTC.

3. The youth tennis program at Golden Gate Park has produced many great players and teams. What are some of your highlights and proudest moments? There are many proud moments for me. My proudest moment is when Olive and Daisy played in the finals of the USTA Women’s Open singles division. I entered them in the tournament to gain some experience at that level. No one else registered so Olive played Daisy on court #6 for their singles final. It was a great match that went to 3 sets. At the end of the match, Daisy losing 6-1 in the 3rd, walked toward the net, dropped her racquet and embraced her sister at the net.

4. How has the game changed since you were a kid? How is your coaching different than the coaching that you received?

I played at a time when players still used wood. The technology has changed the game significantly. The other big change is a technical one. Most players, in my youth, played with eastern and continental grips. As a result there was a lot of net play; serve & volley, chip & charge, flat ground strokes, etc. Currently, most players use semi-western/full western grips so the game has created players who are ground stroking machines.

I never received coaching as a youth player at GGPTC. I was part of a huge group of kids that hung out and just played around. There were no programs at that time for regular kids. It is because of this that I’m proud to present tennis programs that are accessible to regular kids and their families. I am also indebted to the SFRPD for spearheading training for the tennis staff to upgrade the quality of programs and the instructors by sponsoring me to become a certified USPTA/PTR tennis professional. These trainings were an epiphany for me and my colleagues, as for the first time, I realized that tennis was part skill and art. I, therefore, teach with an emphasis on technical ability, tactical knowledge, and above all else, sportsmanship.

While winning is important, effort, mechanical stroke comprehension, tactical ability, and sportsmanship, regardless of outcome, are the real lessons that are part of our programmatic mission. I would much rather our players lose, displaying sportsmanship and courage, then win at all costs, simply for the sake of winning and behaving badly.

5. Who inspires you, on the court or off?

Key role models for me have been President John F. Kennedy, Martin Luther King Jr., Billie Jean King and Arthur Ashe. On the court Pete Sampras, with the cool self possession that he plays with, big serve, and his all-court game are a thing of beauty to observe.

However, my greatest inspiration comes from my dad (Lou), mom (Ilze) and daughters. I can think of nothing better than playing tennis with my girls and having my mother at courtside watching us play.