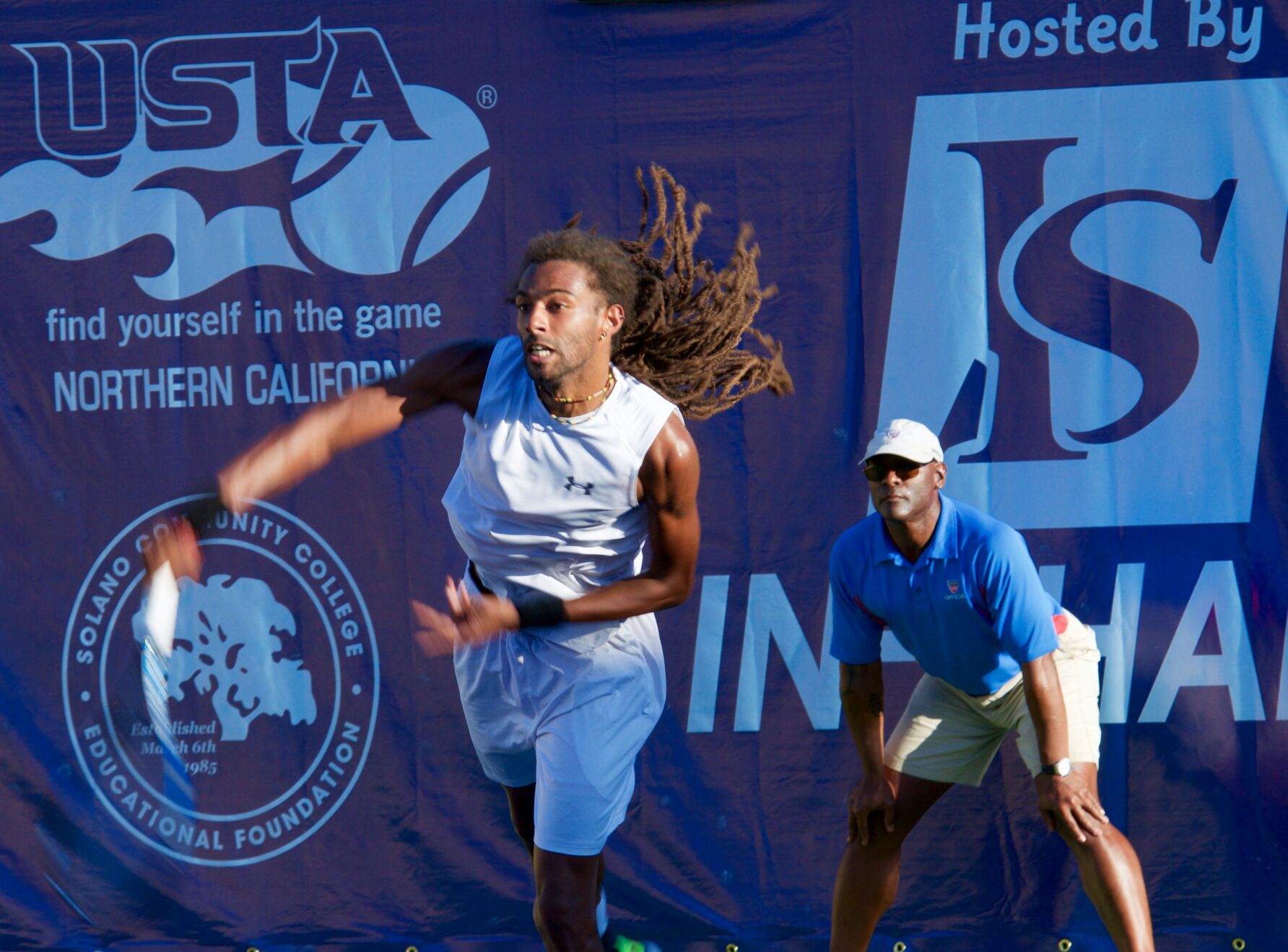 Kevin Ware is a tennis-obsessed ex-web designer living in San Francisco. After a brief (and mildly successful) stint as a tennis writer, Kevin is currently a certified USTA and ITA tennis official, and a line umpire on the USTA Pro Circuit, ATP, and WTA tours. Kevin still plays on GLTF USTA teams when time and injuries allow, and also plays socially with friends at Dolores Park and other courts around the city.

1. How long have you been a tennis official. What do you like best about being an official?

I’m in my fourth year of officiating. But since many of the people I work with are veterans who’ve been doing it for up to 25-30 years, I still get called “Rookie”.

There are many reasons why I love officiating. Primarily, I'm honored to be of service to a sport that I love dearly. I also get immense satisfaction from helping to make matches fair for the participants so that they can play their best tennis without worry. The best part for me is that I love all aspects of officiating. I love USTA tournaments and league events. I love college tennis. And I love my work as a line umpire. I really do love it all.

2. How long have you been playing tennis? How much are you playing now?

I started playing tennis when I was a kid, growing up in Cleveland. I never took lessons or anything like that, though. I just played for fun. In my 20's and 30's, I didn't play much because I was a professional dancer, and couldn't risk injury. However, once I retired from dance, my passion for tennis came out with a vengeance. I took lessons, played on USTA teams, and also played tournaments on the NTRP and GLTA circuits. Surgeries to my knee and shoulder have killed my ability to play multiple matches over multiple days, but I still manage to play doubles at least 2-3 times a week. I love playing but need to always make sure I listen to my body, and take time off when necessary.

3. You’ve been to Wimbledon – do you have other items on your tennis bucket list?

Yes, I've been to Wimbledon...AND I love that tournament. I almost cried the first time I went and saw Centre Court from the Wimbledon Museum lookout. I hope that, one day, I'm able to officiate there during The Championships. And yes, I also have other items in my tennis bucket list. I'd love to go to Monte Carlo as a spectator (after I win Powerball, of course) because it’s in such a spectacular location. And I'd love to do the Australian Open either as a spectator or official. I loved going to Sydney as a participant in the 2002 Gay Games, and would love to experience Melbourne as well.

Also (and with both fingers crossed), I hope one day to be a linesman in a US Open men’s or women’s final. And if I work hard enough, you never know…

4. Who inspires you, both on and off the court?

I have many inspirations in life, and in many different arenas. I admire the heck out of my parents for all that they were able to accomplish while raising two children. I also greatly admire President Obama and his wife, Michelle. But with respect to tennis, the answer would have to be Arthur Ashe. My love of the sport began when I saw Arthur on TV when he won Wimbledon. Seeing someone who looked like me playing this funny game on grass fascinated me. A few years later, I participated in the Cleveland NJTL (National Junior Tennis League), an organization co-founded by Arthur that brought tennis to inner-city kids. It also provided them with a racquet (my first one). I've loved the game ever since.

All that I am now as a player, official, and overall enthusiast is because of Arthur's influence.

5. What are some highlights from your career as a member of the tennis media?

The discussion of Arthur leads into one of the greatest highlights of my 'tennis media' career: the day I met Jeanne Moutoussamy-Ashe! A few years back, USTA NorCal presented Jeanne with an Icon Award at their inaugural 'Beyond the Baseline' event. I obtained a press credential to cover the event for an online publication, and was immediately mesmerized by her presence, talent, and devotion to her husband's legacy. I introduced myself at an appropriate point in the evening, and tried to explain to her the extent to which Arthur had influenced my life. I got choked up as I realized Arthur's influence had come full circle in my life. My presence with her was a result of that earlier Wimbledon TV moment, as well as his NJTL program. Arthur, his presence and his outreach programs were all elements that helped shape my lifelong love of the game. And it was the reason I was standing there talking to her, a living connection to him, at that moment. It was surreal yet wonderful.