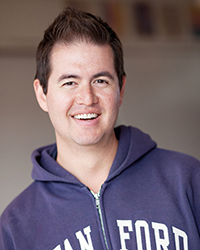 Justin Volmert lives near Golden Gate Park and is a tennis coach at a nearby high school. He joined the Tennis Center Advisory Council (TCAC) to help make the Lisa + Douglas Goldman Tennis Center "a home for everyone".

The TCAC is a volunteer advisory group that represents the interests of the “regular users” of the GTC to the operator (Lifetime Activities) and to the San Francisco Recreation and Parks Department (SFRPD).

"I first started playing tennis as a little one at the YMCA in Eugene, OR," said Volmert. "Decades later, I still love getting on the court."

1. What has life been like during the pandemic as a teacher at a nursery school?

This has been a year of rapid and ongoing change and uncertainty. The weekend before our school closed in March of 2020, I attended a conference in San Mateo. Of course, the whole thing was indoors and nobody was wearing a mask.

Our school closed on a Friday after a tense week and went straight into a virtual school the following Monday, trying to provide support to parents staying home with their little ones. We had to cobble it together on the fly. We shifted to daily newsletters, virtual support meetings for the parents, virtual stories and music for the kids, and weekly bags of play supplies for parents to bring some of the school home. We continued that way for the rest of the 2020 school year.

Despite the fear and the burden the virus and shutdown placed on families with young children, I was inspired by the resilience of the leadership, families, and staff, and by the support we were able to provide each other in that very difficult time.

Last summer, I was a part of our initial re-opening for a very small group of children. It was like emerging after months underground to rebuild society from scratch. It was scary being in close contact with children, but heartwarming to see how flexible they were with all the safety protocols and how happy they were to be back at school. We added additional separate cohorts in the fall and have been in a fairly steady rhythm since then, but it is still far from normal.

2. You are also a tennis coach at Urban High School; what has this year’s season been like so far?

Sadly, I have not been able to coach so far this year because of the COVID regulations preventing teachers from working with multiple cohorts of children. I hope that will loosen up in the fall. My last day of coaching was in March 2020. We had a really fun road trip to Marin with the boys team that almost included an upset win leading into their spring break. None of us had any idea it would be the last time we saw each other in person.

I did some virtual meetings and fitness with the players during the shutdown. It was difficult witnessing how much they struggled with the shift to virtual learning, the lack of contact with their friends, and being stuck at home with their parents---especially for the seniors back in the spring of 2020.

This spring, I was just a spectator, but I was delighted to watch both the boys and girls teams play at the new Goldman Tennis Center! I had to watch from outside the fence, but I was able to say hi to the players, parents, and coaches. I’m so happy they have been able to resume, but I have really been missing it.

3. You are clearly interested in working with kids! What inspires you?

Yes! Working with kids is something I’ve always been drawn to. I’m inspired by kids’ curiosity, their learning process, their laughter, and the intensity with which they seem to experience life. It’s exhausting work, but it’s deeply revitalizing at the same time.

I’m also in awe of other people that work with kids. The staff and community at my current preschool are amazing, and I love the Urban team as well. I have been fortunate to work with many other inspiring teachers along the way. In my experience, there is a lot of warmth, joy, trust, and support that other professions and workplaces are missing.

4. What role has tennis played in your life?

I started playing at the YMCA in Eugene, OR when I was in elementary school. My parents wanted to keep me active in between soccer, basketball, and baseball seasons. One by one, I stopped playing the other sports, and by the time I got to high school, tennis took over. I was proud to play for a very strong high school team and qualify individually for the state tournament as a senior, but then I abruptly stopped playing for a few years. In the decades since then, I played and coached sporadically until more recently when I took over at Urban. Through it all, my best memories always seem to involve sunny days on the court.

As a youngster, especially in adolescence, I was easily frustrated with my own play, and full of the fear of losing, and I expressed it with anger and aggression. Looking back, all those countless hours on the court made me face my emotions, but I didn’t have any tools or perspective to help manage them. Now that I’m older and wiser, I’m a much more joyful player, but now it’s my joints that hold me back.

5. You are a member of the Tennis Center Advisory Committee, which represents the interests of the “regular users” GTC to Lifetime and Rec & Park. Why did you want to serve on TCAC?

I have been so lucky to coach a high school team that hosts its matches at what is now the Goldman Tennis Center. We play our matches alongside young children, seniors, recreational players, and serious competitors. People from around the city are constantly passing by and humming around, Sutro Tower sits up above, sometimes the sun shines, other times the fog blows through. It’s all very San Francisco to me.

With the transition to a new facility and new management, I wanted to help maintain that connection between the courts and the community. It’s important for our high school players, and for me as a GGP neighbor, but I’ve also learned how much it means to the many other users represented by my fellow TCAC members.