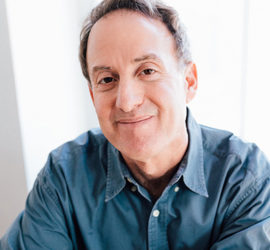 Oakland resident Joel Drucker is one of the world’s leading tennis writers. His work spans the worlds of professional and recreational tennis – history, news, player profiles, psychology, instruction, travel, humor and participatory experiences. In the broadcast realm, Drucker has worked with Tennis Channel since the network first started to air in 2003, first as co-producer of the interview show “Center Court with Chris Myers” and currently as story editor-writer for the network’s coverage of the four Grand Slam events. He also works on a variety of Tennis Channel programs, including ongoing tournaments, special promotions and historic documentaries. In addition to Tennis Channel, Drucker has worked for the likes of HBO, CBS and TNT.

In August 2016, Drucker was named a historian-at-large by the International Tennis Hall of Fame.  He is also the author of two books, “Jimmy Connors Saved My Life” (2004), and, in February 2017, “Don’t Bet on It,” a portrait of his 28-year romance with his late wife, Joan Edwards.

1. What was your path to becoming a tennis writer?

It was in some ways an accident and in others meant to be. From age 12 to 17, growing up in Southern California, I played tennis at least 330 days a year for five or six years. But I wasn’t that accomplished a player and didn’t think seriously about college tennis. So in college, I became a very devoted student – and I mean very. My plan as a student at UC Berkeley was to take part in a summer program called “Cal in the Capital” – interning in DC. But I kept putting this off, spending summers teaching tennis. But I was all set to do this the summer after graduating. In my last quarter of college, though, I had a chance to write for a local tennis magazine, Inside Tennis, which in turn led to a job offer – a paying job, not just a volunteer internship. And though that job only lasted a short time, I saw then how indeed tennis was the world I was meant to occupy. And yet, still, from ages 23 to 33 I worked in the public relations agency world – nothing to do with tennis. Except that I would freelance a little bit during those years for a few local magazines, keeping a pinky toe in tennis. By the time I was 33, though, I started freelancing and started pursuing many tennis assignments.

2. You’ve described yourself as “a reasonable recreational player.” How often and where do you like to play?

Mostly I play at an historic club – the Berkeley Tennis Club.  When I’m not traveling, I’ll play four to five times a week.

3. Your bio says you were “berated by John McEnroe.” What happened?

In 1995, there was a senior tour event at Pebble Beach. I got to play in the Pro-Am with McEnroe (along with several other partners who rotated in and out with him). We reached the stage where I got to serve for the title versus Jimmy Connors. I asked McEnroe what to do. He said, “Serve it to his forehand and get to the net.”  I did.  Of course my serve hardly troubled Connors, who hit a reasonable return. I was late on the volley and hit it long. Said McEnroe, “that’s the worst volley I’ve ever seen.” Fortunately, I got to serve the next point to a much weaker player. We won that point.

How exactly? You’d have to read the book for that answer. In short, I’ll tell you that Jimmy Connors’ entire vision of how to pursue success played a major role in shaping my sensibility.  From Connors I learned that to do great things you need to throw your heart into it and hit for the lines. As an example, as a college student, I used to wear wristbands to finals, as I was about to play a big match at the US Open. Wasn’t I?  And in time, a paper I wrote about Connors that last quarter of college helped fuel the book that was published 22 years later. But much more from Jimbo, too.

5. As a tennis historian, what can you tell us about public tennis in SF and the Bay Area?

Public tennis has a rich tradition in SF and the Bay Area. Places like Golden Gate Park and many others were the major spawning grounds for creating tennis communities. Great players, competition, engagement – a fantastic way to enjoy the sport.