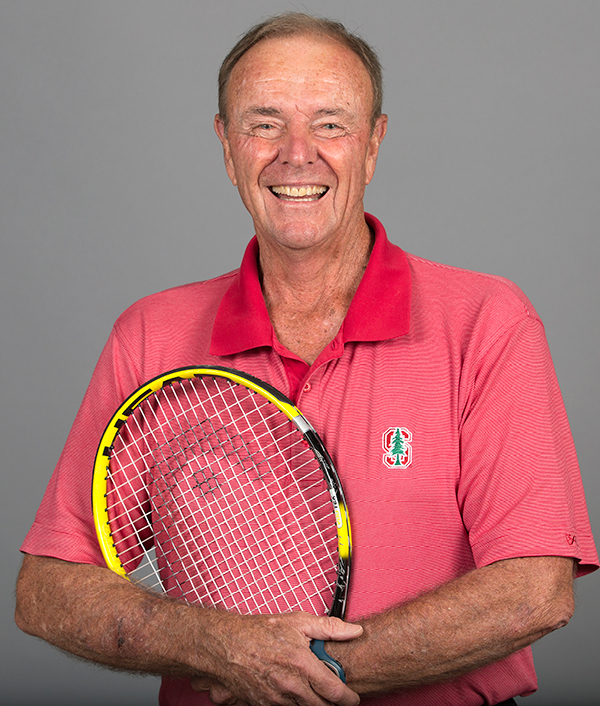 For 38 years (1966-2004) Dick Gould was the head coach of the Men’s tennis team at Stanford.  Along the way he became the winningest coach in Stanford’s history as well as a tennis legend. A few of his many coaching accomplishments include leading Stanford to 17 NCAA Team Championships, 10 NCAA singles championships, and 7 NCAA doubles championships. He was the college coach of nine players who reached the top 15 in ATP world singles rankings and 14 players who reached top 10 in ATP world doubles rankings.

Now the John L. Hinds Director of Tennis at Stanford, Gould has been recognized repeatedly for his achievements and dedication to the sport, including as an honorary member of the US Professional Tennis Association; Inter-collegiate Tennis Association "Coach of the Decade" for both the 1980s and 1990s; Pac-12 Conference “Coach of the Century”; UTSA Educational Merit Award (1983); Kenneth M. Cuthbertson Award for “Exceptional Service to Stanford University” (2002); Positive Coaching Alliance “Lifetime Achievement Award” (2012); and the TEAM USA Coaching Legend Award (2016). His fundraising prowess is also legendary, having spearheaded a $20 million facility renovation drive that resulted in The Taube Center and, during his tenure, the men’s tennis program became completely endowed ($20 million). Currently Gould  serves on the Campaign Committee for the Golden Gate Park Tennis Center renovation project.

1. As the winningest coach in Stanford men's tennis history, you must have some tips for success in tennis. What are three coaching tips you would give to young coaches today?

Be certain your students have fun! Play tennis as much as one wishes, as long as one enjoys it! Some people like to compete and test themselves against others. Some people would rather play doubles. Others prefer to just rally or play points. It doesn’t matter which you do – as long as what you do gives you pleasure. A coach should respect this.

If someone starts to get a little stale or up-tight, there is nothing wrong with letting them step back for a while – even encouraging them to participate in another sport or activity.

ALWAYS be POSITIVE and ENERGETIC! You are blessed to have the opportunity to teach. Channel this into making each lesson or each shot “exciting” – think of your favorite classes in school – your best or favorite teachers were probably able to convey their passion for their subject matter into every small success you had.

You never know it all! Continue to learn – from peers, conferences, trade journals, your kid’s parents (if you are teaching youths) and your pupils themselves!

2. In your 50 years at Stanford, you’ve coached some of the world’s best players. What was it like to coach John McEnroe and the Bryan Brothers?

In my 38 years as men’s tennis coach, I had the great pleasure to have worked with well over 200 individuals, all of whom were different. Realize that a team is much like a family – siblings are all different in terms of personalities, interests and abilities. My job was to take these individuals and, in addition to helping them improve, mold them into a “team” working toward a common goal. My first great recruit was Roscoe Tanner, who later reached the Wimbledon finals only to lose to Bjorn Borg in five sets. His enthusiasm and infectious personality was contagious, and his presence largely responsible for attracting other top players to Stanford, and in my seventh year, led to Stanford’s first NCAA tennis championship.

Each player presents different challenges. As a teacher, my responsibility is to figure out which button to push to get the best results in terms of what I am trying to get across, both technically and tactically. When John McEnroe (the first of three brothers to enroll at Stanford) matriculated, he had reached the semi-finals of Wimbledon less than three months earlier. He had played for six straight months with no time off, and was exhausted after the US Open. Thus, I told him I did not want to see him on the courts in the Fall. The result was that he was relatively fresh in the Spring, and led us to our fourth NCAA Team Championship AND won the individual title!

Twenty years later, the Bryan Brothers and our current coach, Paul Goldstein, led us to our 16th NCAA Championship. This was also an undefeated team, but a very different one from the one of Mac’s championship year. As for the Bryans, I could not keep them off the court – they could never get enough. I would have been doing them a disservice to limit/restrict their practice time!

That being said, I thoroughly enjoyed having all of the above on our teams. All very different, but fantastic young adults at a great time of their lives. I was truly blessed.

3. It’s clear you are passionate about tennis. How did that passion begin?

My first teacher made every ball I hit (and even those I missed) an exciting adventure. I couldn’t wait to have the chance to hit another ball! It made me consider doing something that would allow me to bring the same joy I experienced to others. I became hooked on teaching at about 14 years old.

4. Your wife Anne is also quite accomplished in tennis, having coached the Stanford Women’s team to the NCAA championship in 1978. What is it like to be a two-coach family?

Together we have five children and all had the wonderful experience of participating in sports – my oldest as a tennis player at Princeton, my second as a Nor Cal ranked player in the younger age groups, my third and fourth as Captains and All Americans in Swimming at USC and Stanford respectively, and our youngest as Captain of the Harvard Volleyball team.

Sport can be so good for a young person IF presented well by the coaches. We must remember as coaches and parents that sport is NOT about winning – rather it is about testing oneself and IMPROVEMENT! Of Getting Better! Sport has taught them GREAT values that will stay with them forever, and hopefully be passed on to their own children.

Anne and I have had the great joy of coaching together, and in fact in 1978, each of our teams won the national championship. We also have taught together in many situations –  in 1977 a state department US team trip to China and clinics throughout many parts of the world (even on Cruise Ships), and of course with our boosters on trips to Grand Slam events, with our teams to the Caribbean, Mexico and Hawaii, and even doing instructional videos together and presenting at various conferences. What fun for the two of us, and in the process providing opportunities we might never have had without tennis. We are deeply indebted to this great sport!

5. When you are not on a tennis court, where would we be likely to find you?

Free time? What is that! BUT, I do like to read for recreation, and we travel a great deal!

Actually, I have rarely been on the court since I retired from coaching 13 years ago to become Stanford’s Director of Tennis. Rather, I can usually be found in my office in the Taube Tennis Stadium trying to further promote Stanford tennis and tennis in general. Those of us in the game certainly owe it to ourselves to “give back” to this great game.

A prime interest of mine is trying to help promote the importance of the renovation of the Golden Gate Park Tennis Center – I am proud to serve on the Major Gift Committee of this most important initiative!

##
Editor's note: Coach Gould has been an instrumental force in championing the renovation of the Golden Gate Park Tennis Center. His devotion to the sport of tennis and belief in the positive impact it can have translates in every conversation. If you feel inspired to get involved, give us a shout. We’d love to have your support as well!