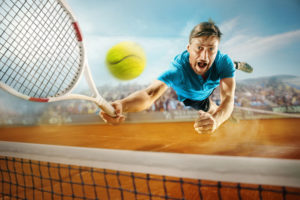 As I walked out of my office after a session with a seventeen-year-old ranked junior, I found myself cornered by the player’s father. “How did it go?” he asked overly enthusiastically. “Fine,” we both said, hoping the father would not probe further. Unfortunately, he continued. For the next five minutes, he commented on his daughter’s game and must have used the word potential —that she wasn’t yet fulfilling—at least a dozen times. He also tied this to her ranking.

As my client’s face grew redder and redder, I shuddered to myself at the damage he was unwittingly doing in front of my eyes. In the mind of this player and virtually every other athlete I’ve met with over the past ten years, the word potential has become a ticking time bomb. I’ve seen players literally shrink in front of me, tank matches, even quit the sport because of the pressure they feel to achieve this intangible level of “potential.”

Naturally, the session with this young player consisted of a discussion of how she could minimize the pressure she was feeling about winning or losing and the excess focus on rankings. Not surprisingly, her mind would get distracted by thoughts related to the consequence of winning, how it would help her get into college, and fulfill her mom and dad’s expectations.

As the dad and my client walked out of my office, he appeared to not yet be fully satisfied and added, “Well, maybe we’ll have something ‘good’ to report after the tournament this weekend.”

The problem with labeling yourself or others with unfulfilled potential and connecting this to rankings is that there is no way to know whether you are ever there. Not only that, but given our propensity to raise the bar whenever we reach a goal, there is rarely a lasting sense of satisfaction. Thinking about potential is simply dangerous territory. It diminishes conversations about skill development and mental toughness and, in the mind of the player, leaves this huge gap between where they are right now and where they are “supposed” to be. From my experience, it’s been far more crippling than productive.

Richard Williams, father of Venus and Serena, kept the two girls away from junior tennis because he didn’t want to create any limitations in the way they viewed themselves as players based on early rankings. He wanted them to think bigger than a number before they fully developed. He wanted them to believe in themselves as champions and develop their game for the long haul, much like Pete Sampras, who demonstrated this by switching from a two-handed to a one-handed backhand early in his career. Sampras’s long-term vision and desire to reach his potential speaks for itself.

An alternate track is to immerse yourself in the developmental process. Be curious about your progress and what you are learning. There is already so much emphasis and focus on the outcome and potential—yet to be realized—that conversations about the process of learning and improvement mixed in with achievement is a more balanced and productive path to take.

To think more long-term, focus on specific goals you can work on. Avoid comparing yourself to others. Focus on exactly the things in your game that you can improve day to day and week to week. Remember your strengths and work on your weaknesses.

Talent and athletic ability are important, but just because you may strike the ball well in practice doesn’t mean you will necessarily translate this into competition. You need to be aware that your ability to manage thoughts and emotions related to winning and losing will determine your long-term growth as a player.

When you finish a tournament, try to focus on what you learned. How did you react under pressure? How aggressively did you play? Did you focus on your game plan? What do you need to work on before the next tournament? Avoid making sweeping negative judgments about your game that are more focused on ranking and comparisons of how much potential you feel you have versus your ability to consistently improve.