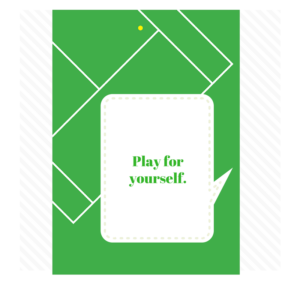 It’s easy to get caught up in the trap of wanting to please other people with your performance and results in tournaments rather than playing for yourself. Let’s be honest: It feels good to have others validate you and be impressed with your game. There’s just one problem with this. You can get addicted to the praise, and it eventually starts to influence your thoughts and ultimately how you play, because you put too much pressure on yourself to win. Instead of focusing on your game plan, you then have to deal with thoughts about letting others down or losing the praise you used to enjoy. When this need gets too intense, your game can begin to falter.

To recapture the joy of the game, refocus your attention on playing the way you like to; remind yourself that it is your own sense of pride and accomplishment that matter most. At the end of the day, your opinion, goals, and standard are what give you the juice to keep playing and improving.

I often reflect on the innocent eyes of many of the ambitious yet anxious junior players I’ve spent time with over the years when I’ve suggested they start playing more for themselves. Their look is one of amazement, as if they have been waiting for someone to give them permission to play freely without the expectations of others weighing them down. When they become aware of the pressure they have been feeling and decide to let some of this go, they often play better and have more fun in the process.

One girl I worked with about two years ago had fallen in the rankings partly due to an injury and partly because she was feeling pressure to win. Her mother had said point-blank to her, “What’s the point of playing unless you are going to be number one in the world?” The mother said the same thing even in my presence, so there was no censoring going on. The problem with this pressure was that this girl was not in a psychological place where that idea was even remotely helpful. She was losing matches, and that expectation was only stressing her out. She confided in me how losing was scary and embarrassing. The thought of playing girls ranked below her terrified her. She was no longer playing for herself.

In time, we focused on what she had control over and how she could turn her mother’s statements into humor. She had a good sense of humor, so this was very effective. She realized how her mother’s lack of experience in the game and own struggle as a child were the main reasons for the pressure she was projecting onto her daughter. With some humor and awareness, this player was able to turn things around and began playing with more confidence once she realized she was the only one who could hit the ball. She realized the pressure was not really about her.

With the exception of doubles, which of course require more compromise, to play for yourself means you recognize that playing tennis is your experience and one that you deserve to have

without interference from others. You are the only one who can decide on strategy changes in the match, feel the full excitement and pressure in tournaments, and ultimately take responsibility for yourself and your game. You need to give yourself permission to play full-out and enjoy the drama of all your matches. Savor your experiences on the court and know that you are the only one who can execute your plan. This game belongs to you. You don’t have to live out the needs of others.

Once you learn to play more for yourself and do the best you can, you will notice that the crowd just blends into the surroundings. You will feel a sense of independence and freedom that is self-affirming. Your confidence grows from this experience because you are no longer in need of anything outside yourself to the same degree. It’s a great way to play and experience the game.