Home » News » Fearless Tennis: Momentum is with you if you think it is 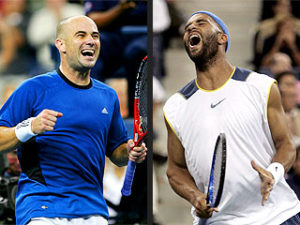 I used to feel a sense of dread when I would miss a volley with a wide-open court. In that instant, I felt the momentum turn against me. I have since learned that momentum shifts are often within our control. It is a subjective experience and can be influenced by the way we think about a particular moment. If you think the momentum is with you or against you, you are probably right. Therefore, you need to be mindful of how you interpret the situation.

If you happened to see the James Blake/Andre Agassi U.S. Open quarterfinal match in 2005, you understand how momentum can shift on a dime. Agassi, down two sets to love, with Blake serving for the match, appeared to redirect the momentum swing before fans’ eyes by hitting a couple of inside-out forehands that clipped the lines. Clearly, Agassi didn’t view the momentum the way most of the fans, or possibly Blake himself, did. Rather, he hunkered down, played fearlessly, won a few key points, and literally stole the momentum back and went on to the final.

But what is momentum? And, more importantly, how can you use it to your advantage? While research conclusions are still mixed on what actually causes momentum shift s to occur, it is now clear that psychological momentum does exist. Therefore, gaining more awareness of the factors that seem to generate feelings of momentum can be very useful. Can you recall the feeling? Do you recall having a sense of control, more motivation, increased self-confidence, concentration, and even a slight rise in your energy level?

Typically, when we think of momentum, we think of a situation in which a player wins a string of points or games or produces a clutch shot when the score is close. However, the truth is that momentum swings like this are much more complex and, most importantly, involve your personal interpretation of the situation. For example, if you believe that you are still in control and that momentum has not  shifted (you believe you can come back, and you have a plan in mind), then it has not  shift ed. Similarly, if your opponent doubts that he or she can keep the winning going (many players do begin to worry about this), then momentum is technically up for grabs. I can’t tell you how many matches I’ve won and seen others win after being down 5–2 or 5–1 in the third. Just win a game or two, and the other player’s perception of momentum can oft en shift as well.

Most of the time, you determine whether momentum has shifted or not. Your thoughts and responses in the situation will play a crucial role in determining what happens in the subsequent games. Alistair Higham, Lawn Tennis Association (LTA) head coach of relations in the United Kingdom and author of Momentum: The Hidden Force in Tennis, described it to me this way, “Understanding the power of momentum and maintaining a positive perspective through the ebbs and flows of a match can greatly impact its outcome.”

Next time you find yourself behind in competition, remind yourself that momentum is with you if you think it is. Remember that your opponent may doubt whether she can actually finish what she’s started. If you’re the one with the momentum, remember that you are still in control of your thoughts, feelings, and behavior— all of which can impact whether momentum is working for you or against you.