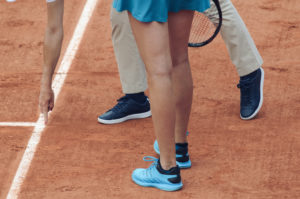 It couldn’t come at a worse time. You’re on the verge of securing your lead or about to win the match when your opponent calls your ball out. You’re convinced the ball hit the line, and you come unglued. But if you don’t want to hand over the momentum to your opponent, you may want to rethink this situation. Your reaction in this moment could determine who walks off with the balls and a win.

In my quarter of a century in the game, I’ve seen players come to blows, parents issued warnings by the police, and teams threaten their opponents—all over a bad line call. Let’s be honest. Given the time and energy you put into the game, it’s agonizing to be cheated. It makes the hair on your neck stand up. It ignites the fight-or-flight part of your brain to go into attack mode. I understand.

However, if you want to get the upper hand on this situation, you may want to ask yourself at what cost are you losing your temper? What typically happens to your game as the stress hormones invade your nervous system?

Th is issue has been a consistent source of confusion and frustration for hundreds of players I’ve talked with over the years. What should you do? Stay cool. It’s not personal. Your opponent probably did see the ball out, even if only because they needed to see it that way. If it’s a big point, and you want to challenge the call, you need to stay calm, walk up to the net, and say, “I’m hoping for a fair match. Would you consider taking two on that?” Appealing to your opponent’s guilty conscience is probably your best option to get the call reversed.

If you don’t want to try to help your opponent “save face” and reverse the call, I highly suggest that you pause immediately after the “bad” line call and take a good deep breath. Once you are composed, remind yourself that your opponent is probably feeling the heat and is scared, which is why he is making this bad line call. Yes, he wants to win, but he’s also scared. Then take any left over frustration and use it to play better. Step up your game, begin dictating play, and stay aggressive. Show your opponent that you are still in charge and will not be swayed by the call, as if to say, “You shouldn’t have done that.” Get your game face back on. Remember that this call will not determine the outcome of the match, but your attitude will. Keep your momentum. Don’t let your opponent steal that from you as well as the last point. The route you choose is up to you.