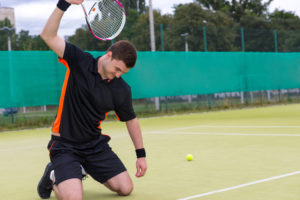 You want to improve, play better in tournaments, and win more. The quest up the ladder of success—the position on the team, your ranking, and status among peers—are all within reach. However, beware. The gap between where you are now and achieving your goal could reside in how you are interpreting your success and set-backs along the way. Be careful of the negative-filtering trap.

Occasionally, I will get on the court with players to see how they play in point situations. I want to see how they construct points, handle mistakes, and carry themselves between points. It gives me an important glimpse into a player’s mind-set and approach to the game. One client I worked with for three years called me because he was unable to kick the habit of extreme self-sabotage and anger on the court. When he would miss a ball, almost without exception, the racquet would hit the ground or the fence; sometimes he would even loft it over the fence (one time narrowly missing an older woman in a wheelchair moving past the court). Th e amazing thing about this particular player was that even on his best days—when we had deep, hard-hitting eight- to ten-ball rallies—and he would miss a ball, he would get visibly disgusted with himself.

One day, after one of these rallies, I walked up to the net and said, “That was one of the best rallies we’ve ever had. What were you thinking when you missed that last ball?”

“I should have gone back crosscourt,” he said, exasperated. “You’d think by now I’d be able to hit a simple ball down the line. How idiotic can you get?”

The reality that this player had hit eight clean, penetrating, deep shots side to side was totally unacknowledged. It was lost in his mental-filtering system. There wasn’t any room for positive success whatsoever.

Getting stuck in the negative-filtering trap can be deadly. After a while, you begin to actually seek out proof that you aren’t good enough, consistent enough, or fast enough. The mind has decided that you are simply not where you should be, and you beat yourself up for it constantly.

To combat this trap, you need to, once again, tune in to your thinking pattern. You need to ask yourself if there is anything positive about what is happening at the same time. Your mind will probably tend to minimize your accomplishments, but you need the other part of your brain to enter the debate and point out things you did well. I cannot tell you how many examples there are of players coming off  the court with a distorted view of their game. One player I worked with lost a match 7–6, 6–4, and told me that it was the worst match he ever played. He could not find one positive thing he did well. Th is mind-set was a huge obstacle in his development because he tended to react negatively on the court after any error. Eventually, he learned to see his game from a slightly more balanced perspective. This is not a recipe simply to accept mediocrity or some Pollyannaish view on your life or game. It’s an act of keeping the ledger balanced.

To the observing eye, tennis is, as are most sports, pretty black and white. If the ball lands inside the white lines more than your opponent’s, you win. If not, you lose. You walk off the court, and people ask, “How did you do?” You answer: “I won” or “I lost.” Black and white. However, what is really happening is so much more. With every defeat, there will be mini successes and things you learned that could propel you forward in your next match or even be a turning point in your career, if you see it that way.

When you find yourself stuck on the negative path, tune in to your thoughts and examine the evidence. If you’re fair, you will most likely find a few positive examples of your greatness.