Home » News » Advocating for a safe return to tennis

During the Covid-19 pandemic, the Tennis Coalition SF has been in active communication with the SF Department of Public Health and the Recreation & Parks department to advocate for safely re-opening tennis courts.

We believe that doubles can be played safely and have sent several letters over the past few months to the SF Department of Public Health to that effect. In the summer nearly 500 people added their names to a petition we sent to DPH. And most recently, on September 29, we sent a letter advocating for a return to doubles, without the restriction of all players being from the same households.

As we said in the letter, we believe "It’s time to permit regular doubles play so that thousands of San Francisco tennis players can return to one of the safest, healthiest activities available during this pandemic."

There is a lot of community support for doubles, as evidenced by Change.org petitions (such as this one to Governor Newsom) that have been circulating in recent days. We encourage players to sign the petition and speak up for doubles tennis in whatever way is most comfortable.

We will continue to advocate for tennis in San Francisco during this unprecedented time, and will keep our readers updated on decisions as they are made.

On May 18, the Tennis Coalition sent a letter to DPH director Grant Colfax to request that tennis courts be re-opened and singles play allowed immediately, followed soon after by doubles. We were delighted that on June 6 the City re-opened public courts to singles play.

We believe that doubles can also be played safely and on June 15 petitioned the SF Department of Public Health to consider allowing it soon. Nearly 500 people added their names to our petition.

We sent a follow-up email to Dr. Colfax on June 24 (see text below), which included a representative sample of comments made on the petition. 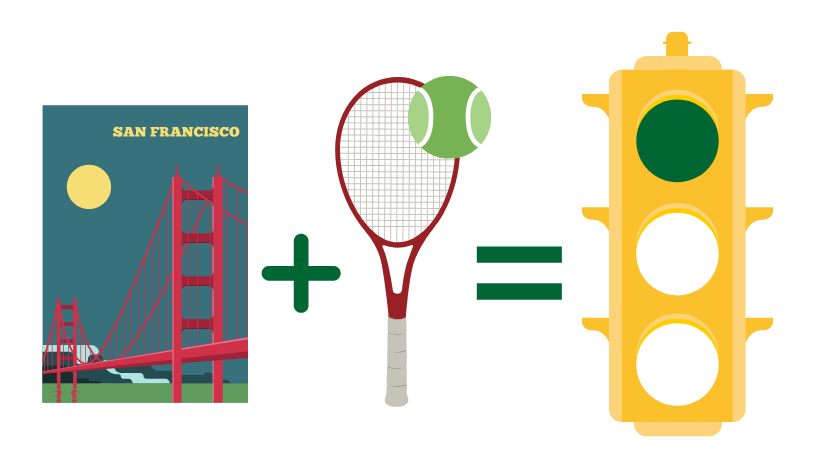 Thank you again for your help getting people back out on the courts in a safe and healthy manner.  We know you are dealing with some very important issues and hope you had the time to read through our letter dated June 15th requesting doubles tennis play begin as soon as possible.  I have attached it again for reference.

In just 7 days, we have collected almost 500 signatures of San Franciscans who are all for opening doubles, the overwhelming majority leaving comments to that effect.  In fact, 4 people sharing a tennis court (2,800 square feet) seems a LOT safer than sharing one table at a restaurant, even if it is outdoors.

We hope you will agree.  Here are some of the comments we have received:

DOUBLES IS A HEALTHY ACTIVITY, ESPECIALLY FOR SENIORS

Playing tennis is so good for my overall health/physical and mental, and at the age of 70 playing doubles is best. We can social distance. - Olive S.

I am not able to play singles at my age. Tennis doubles is my main form of exercise. We can and will practice safe distancing. For example, I now wear a glove on my left hand which keeps me from ever touching the tennis balls. Thank you for considering this. - Tony P.

I’ve been playing singles tennis with my husband since the tennis courts reopened a few weeks ago. It was such a pleasure to be back on the court. My mood improved, my motivation and energy increased, and I slept through the night for the first time in months. My hope is that we can resume doubles play as well. I strongly believe that playing tennis boosts our immune system, and the social connection is essential to our mental health. Tennis play - both singles and doubles- seems extremely safe- people are attuning to each other- there is a flow and strategy to the game- movement on the court is synchronous- social distancing is the rule not the exception. I am very grateful for the careful decision making by our elected officials around re-opening of activities. I think allowing singles and doubles tennis at this time is a low risk decision that promotes well-being for all who play the game.  - Karen F.

Please allow doubles.  It is quite safe, fun and good for mental and physical fitness. - Bill S., Publisher Inside Tennis

For those who know tennis, adding doubles presents almost no additional risk. Six feet of social distancing is the way that doubles is organized. And, doubles is an activity that is so material to our older citizens who need sources of good exercise. - Jim K., Athletic Director SF High School

Being outside and careful to remain 6 feet apart from other players during change-overs makes tennis a relatively safe sport, which is good for physical, mental and emotional health. - Jennifer R.

Doubles tennis can be played safely and with appropriate social distancing. Now that we have the protocols for playing singles safely, these protocols can also be applied to doubles. Furthermore, tennis is played outside in the sunlight with plenty of fresh air. It is certainly safer than going to the grocery store or dining next to others. - Lara W.

I believe doubles can be played safely if proper protocols are followed. While nothing outside one’s home feels completely safe these days, the Covid risk factor assumed by playing tennis - either singles or doubles - seems quite low. It is time to offer SF residents the opportunity to enjoy the fresh air and exercise of doubles play. - Lizanne S.

…Doubles tennis is much less risky, in terms of COVID 19, than eating in sidewalk restaurants or working out in indoor gyms. - Rob O.

The risks are lower than a dozen other activities that have already been authorized! - Bo L.

We have safely been playing doubles in other counties, and singles in SF, and know how to follow protocols. In Doubles tennis you are ALWAYS more than 6 feet away from the other 3 players, and we play outdoors. There is no scientific, logical reason not to allow doubles tennis outside.  - Linda S.

We have been playing doubles in Burlingame for the past 2 weeks. We monitor our spacing and clean all our equipment. We do not share balls. For older people like myself, playing singles is not an option. - Tom Y.

Doubles is now permitted in Palo Alto, Auburn, Lake Tahoe and Incline Nevada. It should now be permitted in San Francisco - Peter B.

Definitely please allow doubles as it's been something other areas have been doing for weeks without issues. - Kevin H.

Thank you for your time and consideration.  If you would like to see the petition and comments we would be most pleased to share them with you and the San Francisco Department of Public Health.