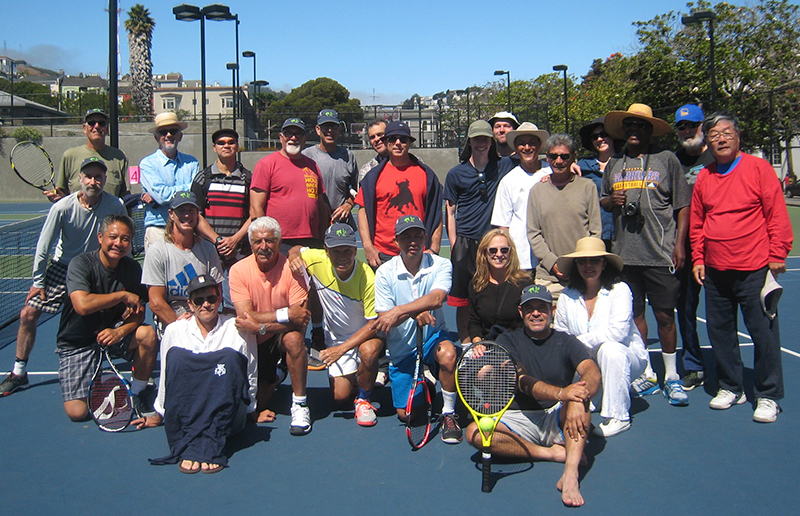 > See photos from the Tournament

I can’t believe that the 10th Dolores Park Tennis Tournament is once again history.  Since 2006 (with a couple years idle during park renovation), this tourney has been conducted in an atmosphere of camaraderie, competition, and community. This year’s event was no different.

The tournament was held on July 22 and 23rd at one of our city’s most beautiful parks. Saturday’s round robin play was welcomed by gorgeous weather -- sunny and warm with a tender breeze.

The 16 doubles teams were organized into four balanced flights, each with four teams, each flight named after a Grand Slam city.  Play began around 8:30 am, and the battling was intense. Though there were dominant winners in the New York and Melbourne flights, when all matches were completed, there were three-way ties in Paris and London.  It was so close that two sub-levels of tie-breaking rules had to be employed to determine the winner in the London flight.  When the smoke cleared, Gilberto & Adolfo emerged as champs of Paris, Kendrick & John L nosed forward in London, Guy & Sean won in New York, and Kevin & Willord were victorious in Melbourne. The stage was set for Sunday’s semi-finals.

The agreeable weather continued Sunday, and the semifinals started about 9 am.  Kendrick & John L were pitted against Gilberto & Adolfo in the first contest.  First set went back and forth with a break, then a break back.  Points went long and were hard to come by.  In the end, Kendrick & John L fashioned a 7-5, 6-3 win.  In the second semi, Guy & Sean clashed with Kevin & Willord.  G&S skipped to a 4-0 lead in the first set, but had to hang on for a 6-4 win.  The tide turned in the 2nd with K&W pulling out a 6-2 set.  So, it came down to a 10-point super tiebreaker to determine the second finalist.  The crowd clustered around to see the spectacle.  The tension was thick, as every point was critical.  K&W fell behind early and staged a mini-comeback bid, but G&S were steady in a 10-6 win.

Before the final, there was a raffle for door prizes.  Lucky winners walked away with gift certificates from City Racquet Shop and The Front Porch Restaurant, tote bags, a Front Porch hoodie, an hour-long tennis lesson, SFFD sweat shirts and T-shirts, and a five-pound ham.

The main event then ensued between Guy/Sean and Kendrick/John L. The appreciative crowd witnessed some spectacular shot-making and amazing extended points.  Kendrick’s tuck & roll saves to keep the ball in play will be the stuff of legend. As it turned out though, Guy’s precise drives and lobs and timely poaching with Sean’s remarkable consistency led them to a 6-3, 7-5 triumph and the championship.

Congrats to Guy & Sean for an outstanding effort!  And to Kendrick and John L for making them earn it!  Kudos to all the players who hit with passion in their flights!  In addition to his crystal trophy, Sean also took home the Most Improved Player Award provided by Kreg; it was a piece of the old Dolores Park tennis court surface before the renovations. Nice!

After the tourney, many of the players congregated at Woods Cerveceria for a celebratory beer (or two…) to toast the victors.

A BIG welcome to new participants in the tournament this year - Rachel, Leslie, John K, Tonya, Jonathan, and Ken.  Hope to see you in 2018!

A hefty dollop of gratitude to my trusty assistants in putting on this event, Liam & Adolfo.  Appreciate your involvement, suggestions, and contributions.  Could not have pulled this off without you.

Finally, thanks to all the good folks who helped unload and load equipment/supplies, to those who helped collect litter on the courts, and to the folks who brought tables, chairs, and food.  Your desire to pitch in was much appreciated!

If you would like to be notified of future Dolores Park Tennis Tournaments, send an email to Gary at gms6126@gmail.com.