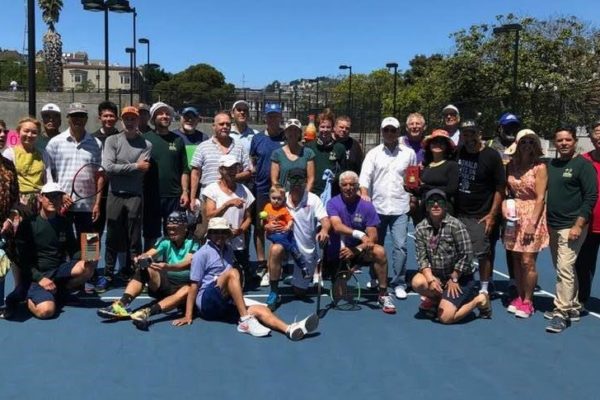 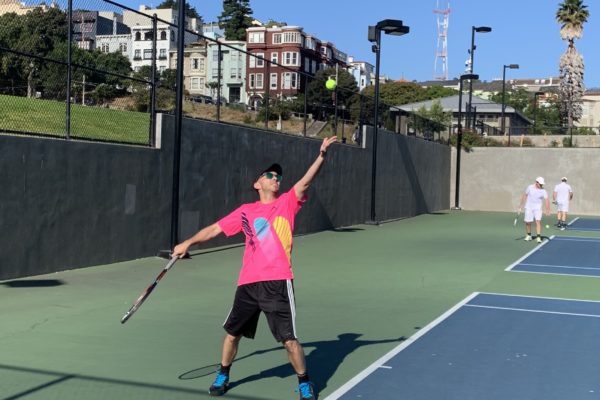 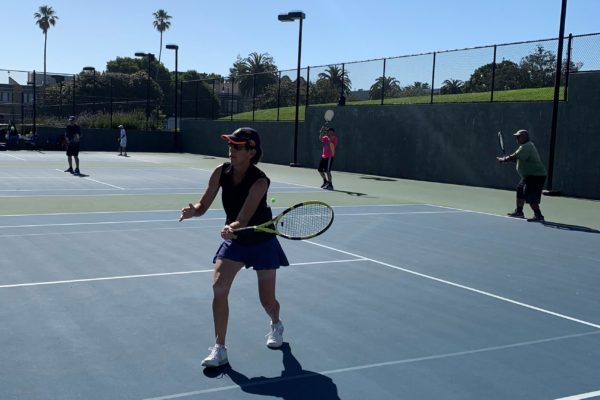 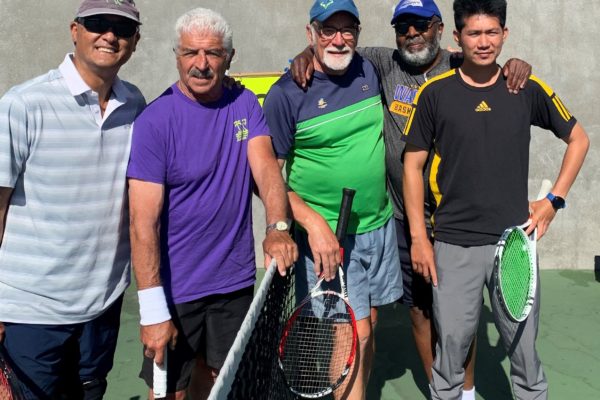 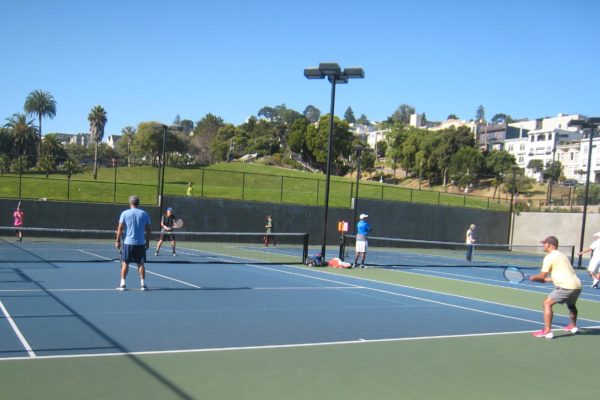 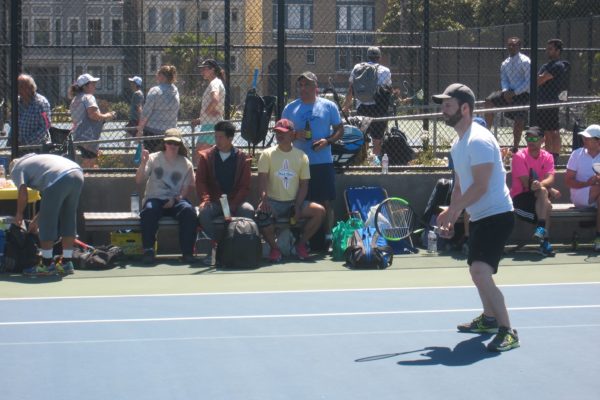 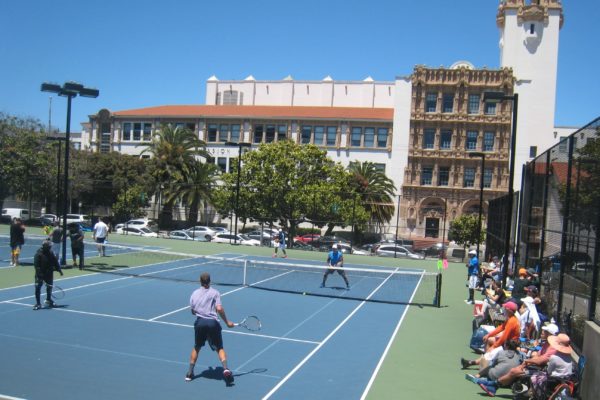 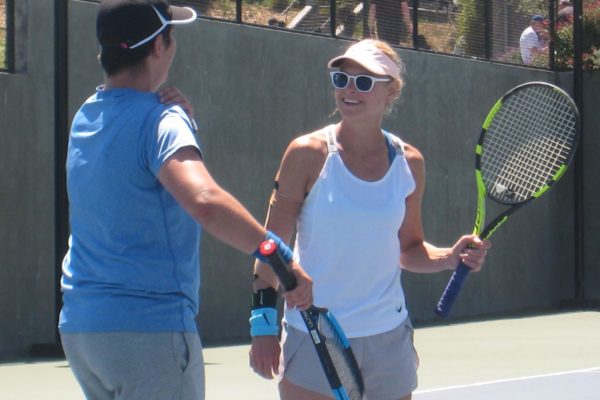 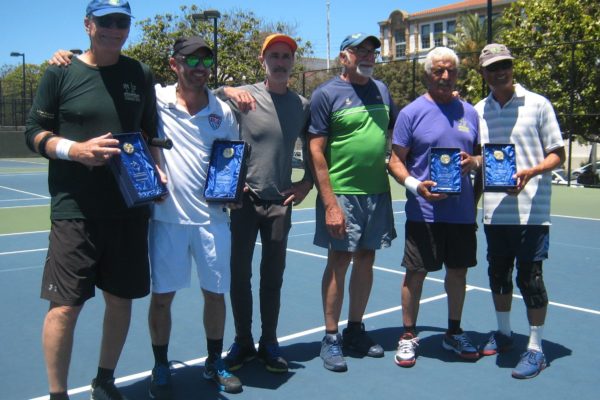 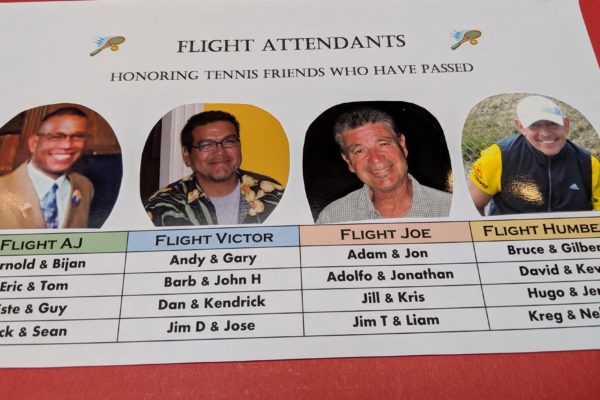 Gorgeous Spring weather welcomed the opening of the 12th Dolores Park Community Tennis Tournament, held on June 22 & 23.  All tournament participants received long-sleeved T-shirts, adorned with the traditional tennis player stick figure and palm tree.  “A clean court is a happy court” was imprinted on the shirt sleeve, the saying being a familiar adage of Joe Macias, a tennis friend who died last year.  In fact, the four flights in the tourney field were named after members of the Dolores tennis community who had passed on – Joe, Victor, Humberto and AJ.  This year’s tournament honored their memories.

The 16 participating doubles teams were organized into four skill-balanced flights, each with four teams.  Saturday play began around 8:30, and the battling was intense. In the end, clear winners emerged, as all of them went 3-0 in their groups.  Eric Quandt and Tom Yankowski were the champs of Flight AJ, Andy Liang and (yours truly) Gary Schoofs leapt out of Flight Victor, Adolfo Dima and Jonathan Low won the Joe Flight, and Kevin Cline and David Serrano-Sewell were victorious in Flight Humberto. The stage was set for the ensuing semi-finals on Sunday.  Kudos to all the teams who scrapped with gusto in their flights!

The Sunday showdowns started about 9 AM under clear blue skies.  Kevin & David were pitted against Eric & Tom in the first contest.  First set went to Kevin & David 6-2, but Eric & Tom rallied in the 2nd set, reversing the outcome 6-2. This forced a super-tiebreaker to determine who would advance.  In the pivotal TB, Eric & Tom squeaked by 10 points to 8.

In the second semi, Gary & Andy clashed with Adolfo & Jonathan. After being down an early break, Adolfo & Jonathan managed to break back and then break again to hand Gary & Andy a 7-5 setback. But the tide turned in the 2nd set, with Gary & Andy dictating in a 6-2 decision.  So, it again came down to a super-tiebreaker. The crowd clustered around to see the nerve-wracking shoot-out. The tension was palpable. Adolfo & Jonathan inched out to a 6-4 lead, but Gary & Andy came back to nose ahead 7-6.  Their momentum flagged however as Adolfo & Jonathan reeled off 4 points in a row to take the TB 10-7.

Before the final, there was a presentation of trophies to Gary & Andy and Kevin & David, recognizing their flight triumphs and valiant efforts in the semifinals.  There was also a raffle for cool door prizes.  Lucky winners walked away with gift certificates from City Racquet and The Front Porch restaurant, Indian Wells tournament swag, tennis T-shirts, bottles of wine, See’s candy, and 6-packs of tennis balls.

This was also the opportunity to give the Most Inspirational Player (MIP) award.  This year the award went to Kendrick Low (Jonathan’s brother) who, despite having had a spinal procedure the day before the tourney and moving with troublesome back pain, still played the event and gave it his all.

The main event then followed between Adolfo & Jonathan and Eric & Tom. The first set was a daunting performance by Eric & Tom who hit aggressively and decisively volleyed at the net, winning the set 6-0.  The tide turned a bit in the second, the scores a lot closer as Adolfo & Jonathan ramped up their defense. However, in the end they couldn’t counteract Eric’s forceful style and Tom’s opportunistic volleying.  The final set ended 6-3, and the championship was secured. Congratulations to Eric & Tom for an outstanding victory!  And to Adolfo & Jonathan for making them earn it!

A BIG welcome to new participants in the tournament this year –  Rick O’Leary, John Hamilton, Jerry Dalrymple, and Nelson Livingston. Hope to see you playing with us soon and in the 2020 tournament!

Heart-felt gratitude to my dedicated co-directors in putting on this event, Liam Passmore & Adolfo Dima.  We spent countless hours wrestling over player classifications, team seeding, flight creation, T-shirt design, food & drink assignments, tourney scheduling, etc, etc. I appreciate your involvement, suggestions, and contributions.  Could not have pulled this off without you.

Finally, thanks to all the folks who helped shuttle equipment/supplies, to those who helped collect litter on the courts, and to the folks who brought extra tables, chairs, and food.  Your desire to pitch in was well regarded!