The Nationals is a USTA  elite junior team event with the top teams from all over the country participating. We were the San Francisco league champions and NorCal sectional champions in the 14&Under coed advanced division. The GGPTC team was not only playing against top notch prestigious programs but in the advanced division we were playing against the elite of the elite.

At this year’s event, we placed 8th and lost two key matches with the score being tied in regulation resulting in a 10-point tiebreaker to decide the whole match! Regardless, we are a young team in our group with two 12-year-olds and two 13-year-olds.

The most prestigious individual award at Nationals is the Sportsmanship award, which was won by Olive. In this National event she was 4-1. The award is given to players who handle victory and defeat with grace and dignity and treat opponents with fairness and courtesy. Her combined total in two elite national events is 9-1.

Her sister Daisy Maunupau won the sportsmanship award at the sectionals event which advanced GGPTC to the Nationals.

Even though Olive won the Sportsmanship Award every player on our team deserves that award. 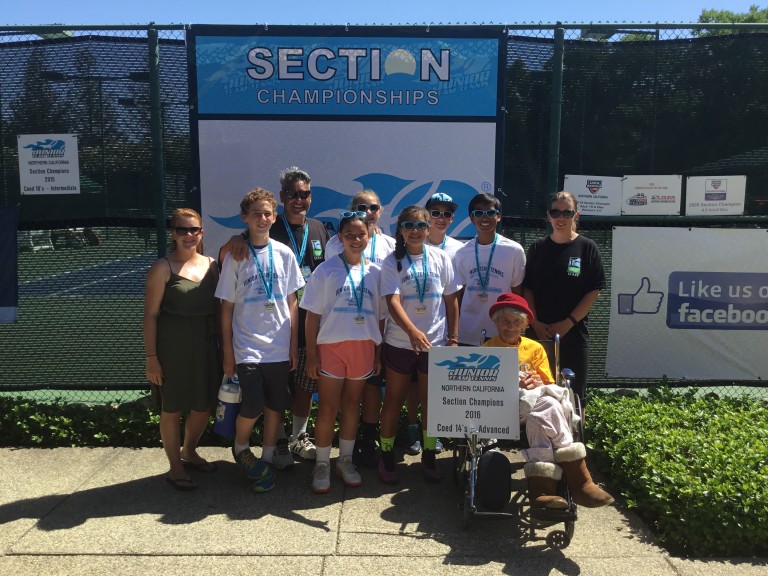 The team also won the banner award, which is given to the team that best crafts a banner that is representative of their team and section. The GGPTC banner was in honor of my Mom, Ilze Maunupau (pictured above with the team at Sectionals), who sadly passed away on September 10. She was a fixture of the team and was going to come with us to Nationals, as she has to all of our team matches and events.

Our goal is to teach the life lessons to children using tennis as a vehicle to achieve that goal; dealing with loss, growing from defeat, technical development, empathy for one’s opponent, sportsmanship, etc. My mom was a critical cog in this style. She was at every match, cheering for every player, friendly to all coaches, parents, and players.

A few more players that I’d also like to highlight:

The team members are:

95% of all participating teams in USTA Junior Team Tennis never play in the Nationals, let alone win their league and sectional events. We have done it twice in 3 years.

This team is truly the only SFRPD municipal team with public park team members.