Competing at Nationals at this level for the second consecutive year and third year of the past four, SFTC brought 18 committed team members to the National Championship tourney—the most of any team in the nation.

After having dominated their league play, Districts, and Sectionals—and playing a record setting 21 players in postseason matches -- SFTC first played a solid team from El Paso defeating them 3-2. Playing twice on opening day, they then faced pre-tourney favorite Mississippi and held on for a thrilling 3-2 decision. Next up was perennial power, Caribbean, and with all gears firing defeated a very strong team 5-0. 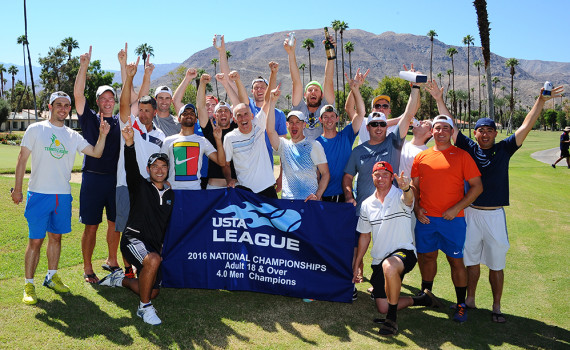 These three wins propelled SFTC in the National Semi-Finals versus the defending Champion, Texas. It came down to the fifth and final match to determine who would advance to the Championship match. After dropping the first set, SFTC roared back to claim a 10-6 tiebreak margin and a 3-2 win sending them to face Las Vegas for the title.

After falling behind 1-2 in the National Championship match, SFTC was victorious in a doubles line and then withstood an adrenaline fueled must-win singles match tiebreaker to claim their second Men’s National title in three years (3.5 in 2014) with a razor-thin 3-2 victory.

In this remarkable year, SFTC went 24-0 for the season including 14-0 in postseason.  Twenty-one players contributed to postseason success -- more than any team in NorCal.

Captain Greg Roberts and Co-captain Kelemen Papp were successful again in their 7th trip to Nationals since 2012.

SFTC teams helmed by Greg Roberts return to Nationals two more times in the next few weeks—for Men’s 4.0 40+ in Indian Wells, and for Mixed 8.0 in Surprise, AZ. This will make nine Nationals teams in five years for SFTC….and they have never finished lower than 5th in the Nation!